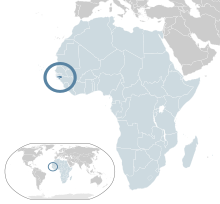 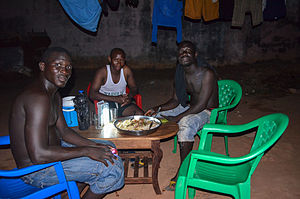 People sharing a meal in Bissau, the capital.

Guinea-Bissauan cuisine is the food culture of Guinea-Bissau, a nation on Africa's west coast along the Atlantic Ocean. Rice is a staple in the diet of residents near the coast and millet a staple in the interior. Much of the rice is imported and food insecurity is a problem[1] in large part due to coups, corruption and inflation.[2] Cashews are grown for export. Coconut, palm nut, and olives are also grown.[3]

September 12 is Amilcar Cabral's birthday, a celebration that includes the eating of yassa, chicken prepared with mustard, citrus and onion. Other holidays and festivals include Carnival in February, Colonization Martyr's Day on August 3, Readjustment Movement Day in November, Independence Day on September 24th, Mocidade Day on December 1 and New Year Day.