French Guianan Cuisine or Guianan Cuisine is a mixture of French, Bushinengue, and indigenous cuisines, supplemented by influences from the cuisines of more recent immigrant groups. Common ingredients include cassava, smoked fish, and smoked chicken. Chinese restaurants may be found alongside Creole restaurants in major cities such as Cayenne, Kourou and Saint-Laurent-du-Maroni. 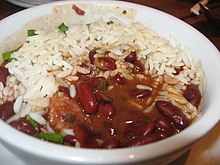 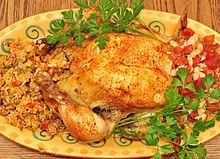 Creole cuisine blends flavors of tropical products Amazonian many from the forest as cassava, awara the comou and game. But many dishes have their roots deep in Africa, Asia, India and Europe. What gives it that spicy and subtle flavor. On the local market, instead of obligatory passage, the Creole merchant advise and make taste their products. This ranges from couac, cassava flour, essential for the realization of , which draws all its power from the cayenne pepper. The cassava, long reserved for the poor, becoming a sought-after commodity, it is used in the stuffed restaurants in the or sweetened either with coconut jam, or with grated coconut or guava paste. As for , which consume a starter or an aperitif, they accompany the famous Ti' Punch.[1] 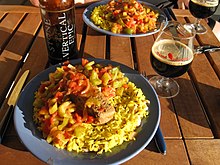 Fricassee of beef with Creole Rice 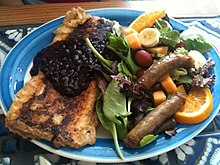