The Group of 77 (G77) at the United Nations is a coalition of 134 developing countries, designed to promote its members' collective economic interests and create an enhanced joint negotiating capacity in the United Nations.[1] There were 77 founding members of the organization headquartered in Geneva, but it has since expanded to 134 member countries according to the organization.[2] China does not consider itself to be a member, nor did it when it was generally regarded as a developing country. However, the country supports and financially contributes to G77, and official statements are made with China. Guinea holds the chairmanship as of 2021.

The group was founded on 15 June 1964 , by 77 non-aligned nations in the "Joint Declaration of the Seventy-Seven Countries" issued at the United Nations Conference on Trade and Development (UNCTAD).[3] The first major meeting was in Algiers in 1967, where the Charter of Algiers was adopted and the basis for permanent institutional structures was begun under the leadership of Raul Prebisch who had previously worked at ECLA.[4] There are Chapters of the Group of 77 in Geneva (UN), Rome (FAO), Vienna (UNIDO), Paris (UNESCO), Nairobi (UNEP) and the Group of 24 in Washington, D.C. (International Monetary Fund and World Bank).

The group was credited with a common stance against apartheid and for supporting global disarmament.[5] It has been supportive of the New International Economic Order.[5][6] It has been subject to criticism for its lacklustre support, or outright opposition, to pro-environmental initiatives, which the group considers secondary to economic development and poverty-eradication initiatives.[5][7][8] 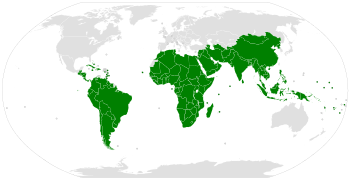 As of 2020, the group comprises all of the UN member states (along with the U.N. observer State of Palestine), excluding the following countries:

The Group of 77 lists China as one of its members.[2] The Chinese government provides consistent political support to the G77 and has made financial contributions to the Group since 1994, but it does not consider itself to be a member.[14] As a result, official statements of the G77 are delivered in the name of The Group of 77 and China or G77+China.[15]

The following is the chain of succession of the chairmanship of the G77:[16]

Presiding countries of the G77 since 1970. Colors show the number of times a country has held the position. Gray = never, Yellow = once, Orange = twice, Red = three times 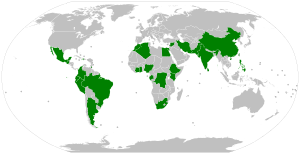