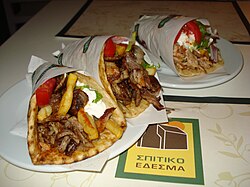 Greek-American cuisine is the cuisine of Greek Americans and their descendants, who have modified Greek cuisine under the influence of American culture and immigration patterns of Greeks to the United States. As immigrants from various Greek areas settled in different regions of the United States and became "Greek Americans," they carried with them different traditions of foods and recipes that were particularly identified with their regional origins in Greece and yet infused with the characteristics of their new home locale in America. Many of these foods and recipes developed into new favorites for town peoples and then later for Americans nationwide. Greek-American cuisine is especially prominent in areas of concentrated Greek communities, such as Astoria, Queens and Tarpon Springs, Florida.

The taverna and estiatorio are widespread in the major US cities, serving Greek-American cooking.[1][2] A typical menu for a taverna would usually include many if not all of the following items: