Gochujang (/ˈkɔːtʃuːdʒæŋ/,[1] from Korean: 고추장; 苦椒醬; gochu-jang, [ko.tɕʰu.dʑaŋ]) or red chili paste[2] is a savory, sweet, and spicy fermented condiment made from chili powder, glutinous rice, meju (fermented soybean) powder, yeotgireum (barley malt powder), and salt. The sweetness comes from the starch of cooked glutinous rice, cultured with saccharifying enzymes during the fermentation process.[3] Traditionally, it has been naturally fermented over years in jangdok (earthenware) on an elevated stone platform, called jangdokdae, in the backyard.

It has commonly been assumed that spicy jang (장; 醬) varieties were made using black peppers and chopi before the introduction of chili peppers. , a mid-9th century Chinese document, recorded the Korean pepper paste as 椒醬 (lit. 'pepper paste'). The second-oldest documentation of pepper paste is found in the 1433 Korean book .[6] Pepper paste is again mentioned in a 1445 medical encyclopedia named .[7]

Chili peppers, which originated in the Americas, were introduced to East Asia by Portuguese traders in the early 16th century.[8][9][10] The first mention of chili pepper in Korea is found in Collected Essays of Jibong, an encyclopedia published in 1614.[11][12] Farm Management, a book from ca. 1700, discussed the cultivation methods of chili peppers.[13]

In the 18th-century books, and Revised and Augmented Farm Management, gochujang is written as gochojang, using hanja characters 苦椒醬 and 古椒醬.[14][15] It is also mentioned that Sunchang was renowned for its gochujang production.[14] 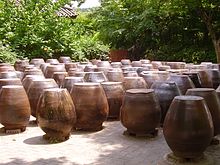 Other recipes use glutinous rice (chapssal, Korean: 찹쌀), normal short-grain rice (mepssal, Korean: 멥쌀), or barley, and, less frequently, whole wheat kernels, jujubes, pumpkin, and sweet potato; these ingredients are used to make special variations. A small amount of sweetener, such as sugar, syrup, or honey, is also sometimes added. The finished product is a dark, reddish paste with a rich, piquant flavor.

Gochujang is also used as a base for making other condiments, such as chogochujang (Korean: 초고추장) and ssamjang (Korean: 쌈장). Chogochujang is a variant of gochujang made by adding vinegar and other seasonings, such as sugar and sesame seeds. It is usually used as a sauce for hoe and hoedeopbap. Similarly, ssamjang is a mixture of mainly gochujang and doenjang, with chopped onions and other spicy seasonings, and it is popular with sangchussam (Korean: 상추쌈).

Gochujang hot-taste unit (GHU) is a unit of measurement for the pungency (spicy heat) of gochujang, based on the gas chromatography and the high-performance liquid chromatography of capsaicin and dihydrocapsaicin concentrations.[17]

Gochujang products are assigned to one of the five levels of spiciness: Mild Hot, Slight Hot, Medium Hot, Very Hot, and Extreme Hot.[17]

Gochujang is used in various dishes such as bibimbap and tteokbokki, and in salads, stews, soups, and marinated meat dishes.[18] Gochujang may make dishes spicier (depending on the capsaicin in the base chili), but also can make dishes sweeter and smokier.