Goan cuisine consists of regional foods popular in Goa, an Indian state located along India's west coast on the shore of the Arabian Sea. Rice, seafood, coconut, vegetables, meat, pork and local spices are some of the main ingredients in Goan cuisine. The area is located in a tropical climate, which means that spices and flavors are intense. Use of kokum is another distinct feature. Goan food is considered incomplete without fish.

The cuisine of Goa originated from its Hindu Saraswat cuisine roots, and was influenced by the 451 years of Portuguese colonialisation and the century of Muslim rule that preceded the Portuguese.[1] Many Catholic dishes are either similar to or variants of their Portuguese counterparts in both naming or their use of ingredients. 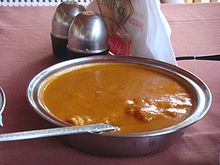 Goan prawn curry, a popular dish throughout the state.

The cuisine is mostly seafood-based; the staple foods are rice and fish. Kingfish (vison or visvan) is the most commonly eaten. Other commonly eaten seafood includes pomfret, shark, tuna, and mackerel. Among the shellfish are crabs, prawns, tiger prawns, lobster, squid, and mussels. The food of Goan Christians is heavily influenced by the Portuguese (the use of vinegar, for example, is very prominent).

The Portuguese introduced potatoes, tomatoes, pineapples, guavas, and cashews from Brazil to Goa and consequently India. The chili pepper is the most important aspect of Goan cuisine; it was introduced by the Portuguese and became immensely popular as a very important spice for wider Indian cuisine. The Portuguese also introduced beef and pork, meats that were and still are considered a taboo by Hindus of Goa, to converts to Catholicism.[2]

Goan Hindu cuisine in Goa is mainly pescetarian and lacto-vegetarian and is very similar to Saraswat cuisine, from which it originates. Goan Hindu cuisine is mild, with use of tamarind and kokum for souring, and jaggery for sweetening. It uses spices such as asafoetida, fenugreek, curry leaves, mustard, and urad dal. Onion and garlic are also used. It also includes vegetables, such as lentils, pumpkins, gourds, bamboo shoots, and roots.The medium of cooking is coconut oil. 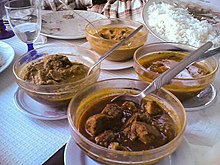 Pork vindaloo is a popular Goan curry dish in the state and around the world.
Main article: Goan Catholic cuisine

Goan Catholic cuisine in Goa is a fusion of Goan Hindu and Portuguese cooking styles. Vinegar (made from the toddy of local coconut trees) is used to give the zingy taste to the meat dishes.