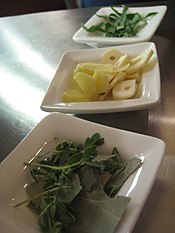 Ghanaian cuisine is the cuisine of the Ghanaian people. Ghanaian main dishes are organized around a starchy staple food, with which goes a sauce or soup containing a protein source. The main ingredient for the vast majority of soups and stews are tomatoes- canned or fresh tomatoes can be used. As a result, nearly all Ghanaian soups and stews are red or orange in appearance. 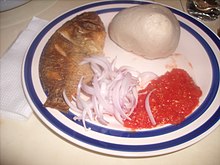 The typical staple foods in the southern part of Ghana include cassava and plantain. In the northern part, the main staple foods include millet and sorghum. Yam, maize and beans are used across Ghana as staple foods. Sweet potatoes and cocoyam are also important in the Ghanaian diet and cuisine. With the advent of globalization, Cereals such as rice and wheat have been increasingly incorporated into Ghanaian cuisine. The foods below represent Ghanaian dishes made out of these staple foods.

Foods made with maize

Foods made with rice

Foods made with cassava

Foods made with beans

A deviation to the starch and stew combination are "Red red" and "tubaani". These are primarily based on vegetable protein (beans). "Red Red" is a popular Ghanaian bean and fish stew served with fried ripe plantain and often accompanied with gari, fish and pulses. It earns its name from the palm oil that tints the bean stew and the bright orange color of the fried ripe plantain. Tubaani is a boiled bean cake, also called moimoi in Nigeria.

Foods made with yam

Most Ghanaian side dishes are served with a stew, soup or Mako (a spicy condiment made from raw red and green chilies, onions and tomatoes (pepper sauce). Ghanaian stews and soups are quite sophisticated, with liberal and delicate use of exotic ingredients, a wide variety of flavours, spices and textures.

Vegetables such as palm nuts, peanuts, cocoyam leaves, ayoyo, spinach, wild mushroom, okra, garden eggs (eggplant), tomatoes and various types of pulses are the main ingredients in Ghanaian soups and stews and in the case of pulses, may double as the main protein ingredient. 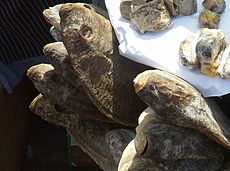 Koobi is dried tilapia that has been salted

Palm oil, coconut oil, shea butter, palm kernel oil and peanut oil are important Ghanaian oils used for cooking or frying and may sometime not be substituted in certain Ghanaian dishes. For example, using palm oil in okro stew, eto, fante fante,[4] red red, egusi stew and mpihu/mpotompoto (similar to Poi).[5] Coconut oil, palm kernel oil and shea butter have lost their popularity for cooking in Ghana due to the introduction of refined oils and negative Ghanaian media adverts targeted at those oils. They are now mostly used in few traditional homes, for soap making and by commercial (street food) food vendors as a cheaper substitute to refined cooking oils.

Ghanaian tomato stew or gravy is a stew that is often served with rice or waakye. Other vegetable stews are made with kontomire, garden eggs, egusi (pumpkin seeds), spinach, okra, etc.

Most of the dishes mentioned above are served during lunch and supper in modern Ghana. However, those engaged in manual labour and a large number of urban dwellers still eat these foods for breakfast and will usually buy them from the streets.

Bread is an important feature in Ghanaian breakfast and baked foods. Ghanaian bread, which is known for its good quality, is baked with wheat flour and sometimes cassava flour is added for an improved texture. There are four major types of bread in Ghana. They are tea bread (similar to the baguette), sugar bread (which is a sweet bread), brown (whole wheat) bread, and butter bread. Rye bread, oat bread and malt bread are also quite common.[9]

Etor is a popular dish in south Ghana, prepared with plantain and/or with yam boiled and mashed, and mixed with palm oil. Groundnuts (peanuts) and eggs are used to garnish the dish.

There are many sweet local foods which have been marginalized due to their low demand and long preparation process. Ghanaian sweet foods (or confectionery) may be fried, barbecued, boiled, roasted, baked or steamed.

Fried sweet foods include cubed and spiced ripe plantain (kelewele) sometimes served with peanuts. Koose made from peeled beans (and its close twin Acarajé or akara made from beans which is not peeled), maasa,[10][11] pinkaaso,[12] and bofrot/Puff-puff[13] (made from wheat flour); kuli-kuli,[14] dzowey and nkate cake (made from peanuts);[15] kaklo and tatale[16] (ripe plantain fritters); kube cake and kube toffee (made from coconut); bankye krakro, gari biscuit,[17][18] and krakye ayuosu (made from cassava); condensed milk, toffee, plantain chips (or fried plantain)[19] and wagashi[20] (fried farmer's cheese) are fried Ghanaian savory foods (confectionery).

Kebabs are popular barbecues and can be made from beef, goat, pork, soy flour, sausages and guinea fowl. Other roasted savoury foods include roasted plantain, maize, yam and cocoyam. 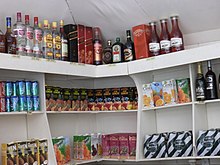 Ghanaian beverages at a convenience store in Ghana

In southern Ghana, Ghanaian drinks such as asaana (made from fermented maize) are common. Along the Lake Volta and in southern Ghana, palm wine extracted from the palm tree can be found, but it ferments quickly and then it is used to distil akpeteshie (a local gin). Akpeteshie can be distilled from molasses too. In addition, a beverage can be made from kenkey and refrigerated into what is in Ghana known as iced kenkey. In northern Ghana, bisaab/sorrel, toose and lamujee (a spicy sweetened drink) are common non-alcoholic beverages whereas pitoo (a local beer made of fermented millet) is an alcoholic beverage.