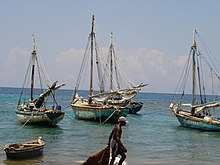 Although the West Indies has limited resources in terms of developing a large-scale fishing industry, the value of fish and sea products as a source of food has long been recognized. All Caribbean territories therefore have fishing industries.

Most Caribbean fishermen ply their trade from small boats (4–11 meters). These small craft, often without protection from sun or rain, are forced to remain very close to shore, seldom going more than 16 kilometers offshore.

The method of fishing depends on the type and size of the fish to be caught. Trawling is used to catch shrimp, carite, snapper and cavali. The main catches from seine and gill nets are king fish, shark and carite. Fish pot catches are red snappers and jacks. Fishing is a year-round activity in the Caribbean and it directly employs thousands of people.

A number of different methods of selling are used in the Caribbean. Most small-scale fishermen take some of the catch for their families and sell the rest at the beach. If there is a delay between catching the fish and eating it, then some form of processing has to take place. The three processing methods that are common in the Caribbean are: