The African Union in location to the rest of the world.

The African Union covers almost the entirety of continental Africa and several off-shore islands. Consequently, it is wildly diverse, including the world's largest hot desert (the Sahara), huge jungles and savannas, and the world's longest river (the Nile).

The AU has two land borders: Morocco borders the Spanish semi-enclaves of Ceuta, Melilla, and Peñón de Vélez de la Gomera and Egypt's Sinai Peninsula borders the Gaza Strip for 11 km (6.8 mi) and Israel for 400 km (248 mi) on its western frontier. Since it is Asian, the Sinai is the only territorial region of the AU on another geopolitical continent. 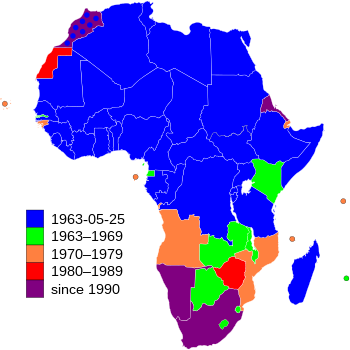 OAU member states by the decade they joined.

The AU is the successor to the Organisation of African Unity, an international organization that gradually included sovereign African states as the continent was decolonized. The membership of the African Union, and consequently its borders, have not changed since its founding.