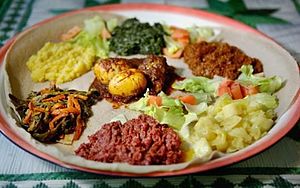 A plate of injera with various Eritrean stews 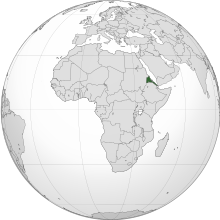 Eritrean cuisine is based on Eritrea's native culinary traditions, but also arises from social interchanges with other regions. The local cuisine shares similarities with those of neighboring Ethiopia and other African countries in the region.

Eritrean cuisine shares similarities with surrounding countries' cuisines; however, the cuisine has its unique characteristics.

The main traditional food in Eritrean cuisine is tsebhi (stew), served with [[injera] (flatbread made from teff, wheat, or sorghum and hilbet (paste made from legumes; mainly lentil and faba beans). A typical traditional Eritrean dish consists of injera accompanied by a spicy stew, which frequently includes beef, goat, lamb or fish. Overall, Eritrean cuisine strongly resembles that of neighboring Ethiopia,[1][2] although Eritrean cooking tends to feature more seafood than Ethiopian cuisine on account of its coastal location.[1] Eritrean dishes are also frequently lighter in texture than Ethiopian meals as they tend to employ less seasoned butter and spices and more tomatoes, as in tsebhi dorho.[citation needed] 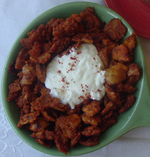 Kitcha fit-fit is a staple of Eritrean cuisine. It consists of shredded, oiled, and spiced bread, often served with a scoop of fresh yogurt and topped with berbere (spice).

When eating injera diners generally share food from a large tray placed in the centre of a low dining table. Numerous pieces of injera are layered on this tray and topped with various spicy stews. Diners break into the section of injera in front of them, tearing off pieces and dipping them into the stews.

The stews that accompany injera are usually made from beef, chicken, lamb, goat, mutton or vegetables. Most Eritreans, with the exception of the Saho, like their food spicy and hot. Berbere, a spice mixture that consists of a variety of common and unusual herbs and spices, accompanies almost all dishes. Stews include zigni, which is made with beef; dorho tsebhi, which is made with chicken; alicha, which is a vegetable dish made without berbere; and shiro, a purée of various legumes.

When making Ga’at a ladle is used to make an indentation in the dough, which is then filled with a mixture of berbere and melted butter, and surrounded by milk or yogurt. When dining, a small piece of Ga'at is dipped into the berbere and the butter sauce, and then into the milk or yogurt.

Influenced by its past as an Italian colony, Eritrean cuisine also features unique interpretations of classic Italian dishes.[6] Among these specialties are pasta sauces spiced with berbere.[7]

Most dishes common to Eritrea are either meat based or vegetable based stews that are served over the spongy, fermented bread Injera 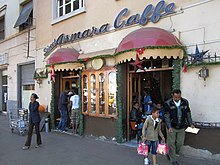 A typical cafe in Asmara selling Panettone during Christmas

A vintage Gaggia espresso machine in a bar in Eritrea

Suwa is the name for the home-brewed beer common in Eritrea. It is made from roasted corn, barley and other grain and is flavored with gesho, a type of buckthorn leaf. The beverage is often made for celebrations; a sweet honey wine (called Mies) is also commonly served. The coffee ceremony is one of the most important and recognizable parts of Eritrean cultures. Coffee is offered when visiting friends, during festivities, or as a daily staple of life. If coffee is politely declined, then tea (shahee) will most likely be served.

Even though Eritrea has a long tradition of coffee drinking for centuries, Italian style coffee like espresso and cappuccino are extremely common in Eritrea and is almost served in practically every bar and coffee shop in capital Asmara.

The biggest brewery in the country is Asmara Brewery, built 1939 under the name of Melotti. The brewery today produces a range of bevrages. A popular Eritrean bevrage that is common during Eritrean festivities is Eritrean styled Sambuca, in Tigrinya it is translated to areki[12] [13]