Emirati cuisine (Arabic: المطبخ الإماراتي‎) is the traditional Arabic cuisine of the United Arab Emirates and shares remarkable similarities with cuisines from neighboring countries, such as Omani cuisine and Saudi Arabian cuisine, a well as many Middle Eastern and Asian cuisines. The modern diet of the United Arab Emirates (UAE) is multicultural.

The cultivation of date palms in the area can be traced back to the mid-third millennium BC (commonly referred to as Umm Al Nar period in the United Arab Emirates) which many date seeds found in Umm al-Nar sites. The presence of grinding stones as well as fired clay ovens in archaeological sites indicate that grain processing was also performed. Studies of human dental remains dating back to the third millennium shows high level of attrition which is believed due to the mastication of dry bread.[1]

The cuisine which originated in the area that consists of the United Arab Emirates today and previously the Trucial States is formed by a similar Arabic and Middle Eastern cuisine which is consumed in the wider Arabian Peninsula. The food consists of a mixture between a bedouins diet, which consist of meat and camel milk, fishermen's diet, which consists mainly of fish common in the Persian gulf, and farmers diet, which mainly consists of dates. A blend of the following diets as well as a mixture of spices such as cinnamon, saffron, and turmeric formed the basis of the common dishes that was consumed in the Trucial states region and the current traditional Emirati cuisine.[2]

The traditional food of the United Arab Emirates uses a lot of meat, grain, and dairy. Vegetables are easy to grow such as cucumbers and tomatoes in fertile soil, and are strongly featured in the diet. Dried lemons, called loomi, are also heavily featured, gown locally, and used in most dishes. Mangos are also grown usually in the northern emirates in villages such as Masafi. Meats traditionally used are chicken or small fowl, such as Houbara bustards, and goats. As camels are highly prized for their milk and transporting ability, the eating of camel meat is normally reserved for special occasions.

The dishes are usually like stews, as everything is often cooked in a single pot. Saffron, cardamom, turmeric, and thyme are the core flavors used in Emirati cookery. The introduction of rice to the diet came when the traders moved to the region. Leaves from indigenous trees, such as the Ghaff, were also used to stuff small birds, releasing their flavor during the cooking process.

Traditional dishes include Maq'louba, , Harees, Machbous, Frsee'ah, Fireed, Jisheid, and Mishwy Breakfast in the UAE usually features breads like raqaq, khameer, and chebab, served with cheese, date syrup, or eggs. These were made over a curved hot plate, resembling a stone, which would have been used by the Bedouins. Balaleat is another dish, but its advent again with the traders, who introduced pasta.

Sweet options include luqeymat, a deep fried ball of pancake batter that is rolled in sesame seeds and then drizzled with date honey. Other desserts include khabeesa, which is flour bread crumbs blended with sugar, cardamom, and saffron or bethitha, a semolina blended with crushed dates, cardamom, and clarified butter.

At the close of the meal, it is usual to be served with a red tea infused with mint, which aids the digestion. Other traditions to the meal include a welcome with dates and gahwah (Arabic coffee), which are offered on arrival and are kept available through the guests visit.

Levantine food is sometimes confused with Emirati/Khaleeji, but shawarma, hummous, tabbouleh, and mixed grill, whilst having similar characteristics, are fairly recent additions to the Emirati diet.[citation needed]

Seafood has been the mainstay of the Emirati diet for centuries. The United Arab Emirates cuisine is a reflection of a great Arabian heritage and vast exposure to civilizations over time. Muslims are prohibited from eating pork, so it is not included in Arab menus. Meat, fish, and rice are the staple foods of the Emirati cuisine. Lamb and mutton are the more favored meats, than goat and beef.

Popular beverages are coffee and tea, which can be supplemented with cardamom, saffron, or mint to give it a distinct flavor.[3]

Hotels frequently have pork substitutes such as beef sausages and veal rashers on their breakfast menus. If pork is available, it is clearly labelled as such.

Alcohol is generally only served in hotel restaurants and bars (but not in Sharjah). All nightclubs and golf clubs are permitted to sell alcohol. Specific supermarkets may sell pork, but are sold in separate sections.[4]

Dishes forming part of the Emirati cuisine include:[5] 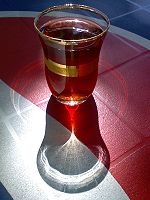 Traditional Arabic tea in the UAE

The inaugural Dubai Food Festival was held from 21 February to 15 March 2014.[7] According to Vision the event was aimed at enhancing and celebrating Dubai's position as the gastronomic capital of the region. The festival was designed to showcase the variety of flavours and cuisines on offer in Dubai featuring the cuisines of over 200 nationalities at the festival.[8]