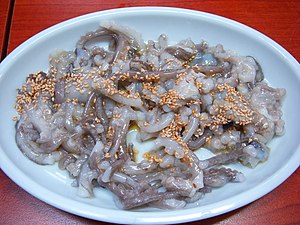 Sannakji is live octopus that has been cut into small pieces and served with its arms still squirming.

Youtube video of the preparation and eating of sannakji

In October 1963, a case was reported in Vitória de Santo Antão, Pernambuco, Brazil. A man named Antônio Pinto bought a donkey for three thousand Cruzeiros. He then galloped with the animal and stopped at every bar he sighted to have a drink. Then, he bit on the animal's ear strong enough to swallow it. He said that he had eaten the animal's ear as a "snack." Finally, he strangled the donkey with a cord.[1][2][3]

In 1998, 53-year-old Boussounga Zanga, a watchman originating from Burkina Faso, while in Abidjan in Ivory Coast, was bitten by his neighbour's dog. Enraged by a bite wound in his left buttock and by a rant by the neighbour that Zanga had provoked the animal, he cooked the animal then served his family with dog meat. He was then questioned by the neighbour, who found the dog's head and skin inside a trash bin. The dog's owner asked for an indemnity of US$ 750.[4]

In 2006, 49-year-old Reggie Paul Fountain ate his pitbull puppy alive. He was arrested, and explained that he was on PCP and cocaine.[5]

Several television game shows such as Fear Factor, Survivor and I'm a Celebrity feature segments where contestants must eat live animals including spiders, cockroaches and grubs. Other shows such as Man vs. Wild also feature Bear Grylls eating various insects alive. There have been calls to ban eating animals alive on these shows.[6] A YouTube channel called "Food for Louis" shows Louis Cole eating live animals.[7]

In Japan, Ikizukuri ("prepared alive") is the preparation of sashimi ("pierced food") made from live seafood. The most popular sea animal used in ikizukuri is fish but octopus is typically the only species that is still moving on the plate.

Another fish dish invented by a Taiwanese chef from Chiayi, is called Yin Yang fish (also dead-and-alive fish) in which the fish's body (but not the head) is rapidly deep-fried and served while the head is still fresh and moving. It is prepared extremely quickly, with care not to damage the internal organs, so that the fish can remain alive for thirty minutes.[8][9]

In an interview, celebrity chef Raymond Blanc stated that in Japan, he had eaten live eels. He was advised to add vinegar and sake, which made them jump around, and then swallowed them whole.[10]

In 2012, a video showing a woman in Japan eating a live frog was posted on YouTube and went viral. In the video, a live frog is seen stabbed alive, stripped of its skin, and its inedible innards removed to be served as fresh sashimi on an iced platter.[11]

In 2007, a newspaper reported that a man from south east China claimed that eating live frogs for a month cured his intestinal problems. He also eats live mice and rats.[12]

Andrew Zimmern of the Travel Channel's Bizarre Foods ate frog sashimi in restaurant seafood name Asadachi in Shinjuku. Though most of the frog is served dead (and raw), the meal begins by eating the frog's fresh, still-beating heart.[8]

Consuming the beating heart and blood of live snakes has been a reported practice among some locals and tourists in certain parts of Vietnam, particularly Le Mat village in Hanoi.[13][14] The practice was documented on Gordon's Great Escape when celebrity chef Gordon Ramsay swallowed the beating heart of a cobra at a Ho Chi Minh eatery.[15][16] It was also consumed by celebrity chef Anthony Bourdain[17] in the same city.[18]

In Korea, Sannakji is the preparation of live octopus that has been cut into small pieces or prepared whole, and served with its arms still squirming. Sannakji connoisseurs enjoy more than just the taste of the fresh meat; they enjoy the sensation of the still-active suction cups on the octopus' arms as they stick to the mouth. Novices are advised to chew before swallowing to avoid the threat of being choked.[8]

Sea urchins are prized as a delicacy in many places worldwide (particularly in Japan, France, South Korea, Chile, New Zealand, the Philippines, Italy, Spain, the Mediterranean,[19] and North America)[20] for their briny-flavoured gonads. The gonads are often eaten raw, such as in sushi (typically called uni), and some people prefer to eat them immediately after they are cut open. Scissors are often used to avoid the protective spines whilst cutting the animal open. The gonads do not move, even when taken from the live animal.[8]

In China, drunken shrimp is a dish that can be served live, although it can also be prepared with dead shrimp.[21] When served live, the shrimp, usually 10 per serving, are first doused in a strong liquor which makes them less likely to struggle while being swallowed and also creates a flavourful marinade. A plate is typically held over the bowl to prevent the shrimp from leaping out as they are much more active than when served as Odori ebi.[8][9]

Odori ebi ("dancing shrimp") is a type of Japanese sashimi that contains young shrimp, usually only one individual per serving. The shrimp has its shell removed and sometimes its head as well. These can be deep fried and served alongside the rest of the shrimp, which is still moving its legs and antennae while being eaten. The shrimp only dies when chewed.[9]

Oysters are the most common animal eaten alive, as it is generally their state when served raw.[22][8]

A chain of restaurants, based primarily in Copenhagen, serves a salad crawling with live ants. The ants are chilled so that they move slower, and are supposed to taste like lemongrass.[9]

Live cockroaches were eaten in a competition in Florida in 2012. The winner collapsed and died from asphyxia due to choking and aspiration of gastric contents.[23] 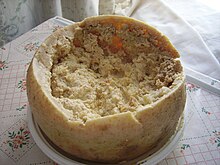 One example of eating live larvae is the witchetty grub of Australian aboriginal cuisine, which can be eaten alive and raw or cooked.[8]

Casu marzu is a traditional Sardinian sheep milk cheese, notable for containing live insect larvae. It is found almost exclusively in Sardinia, Italy. Casu marzu goes beyond typical fermentation to a stage most would consider decomposition, brought about by the digestive action of the larvae of the cheese fly Piophila casei. These larvae are deliberately introduced to the cheese. The cheese received attention on Bizarre Foods with Andrew Zimmern. Zimmern described the taste of the cheese as "so ammoniated" that "...it scorches your tongue a bit." The cheese is known to leave an aftertaste for a duration of up to several hours.[24] Similar milk cheeses notable for containing living insect larvae are produced in several Italian regions.[25][26][27]

According to the Talmud (a central text of Rabbinic Judaism and the basis for all codes of Jewish law) the sixth law of the Noahide Laws (Hebrew: שבע מצוות בני נח‎ Sheva mitzvot B'nei Noach, lit. "Seven Laws [of the] Children [of] Noah", which are believed to apply to all humanity) sets out the moral imperative not to eat of a live animal (the Tosefta has the graphic language not to eat "a limb torn from a living animal").

According to Jewish law, this Noahide Law is (along with the other six) considered to be binding on all the "children of Noah" – that is, all of humanity – as the minimum set of morality laws to be practiced by all human beings, irrespective of their religion. The laws of Kashrut, on the other hand, set out additional regulations which are binding upon Jews only. Thus, Kosher laws further determine what is and is not fit for consumption by Jews, and under what circumstances even otherwise kosher foods become unfit for consumption for Jews (including how an animal must be killed by Jewish ritual slaughter before it is consumed by Jews). Thus, eating of a live animal is forbidden under Noahide Law and specifically for Jews under Kosher law.

Any non-Jew who adheres to the Noahide laws is regarded as a righteous gentile, and is assured of a place in the world to come (Hebrew: עולם הבא‎ Olam Haba), the final reward of the righteous.[28][29]