This article is about the group of countries. For other uses, see E7.

The E7 (short for "Emerging 7") is the seven countries China, India, Brazil, Turkey, Russia, Mexico and Indonesia, grouped together because of their major emerging economies.[1] The term was coined by the economists John Hawksworth and Gordon Cookson at PricewaterhouseCoopers in 2006.[2] 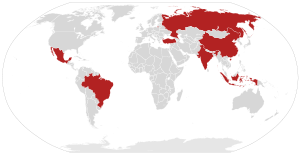 The following table is an estimate for largest 10 economies by nominal GDP using PPP exchange rates for 2030 made by UK based Standard Chartered.[8]

Below are the E7 countries and their predicted economies in 2050 [9][10] as predicted by Goldman Sachs: