The discount window is an instrument of monetary policy (usually controlled by central banks) that allows eligible institutions to borrow money from the central bank, usually on a short-term basis, to meet temporary shortages of liquidity caused by internal or external disruptions. The term originated with the practice of sending a bank representative to a reserve bank teller window when a bank needed to borrow money.[1]

The interest rate charged on such loans by a central bank is called the discount rate, base rate, or repo rate, and is separate and distinct from the prime rate. It is also not the same thing as the federal funds rate or its equivalents in other currencies, which determine the rate at which banks lend money to each other. In recent years, the discount rate has been approximately a percentage point above the federal funds rate (see Lombard credit). Because of this, it is a relatively unimportant factor in the control of the money supply and is only taken advantage of at large volume during emergencies.

In the United States

Institutions must provide acceptable collateral to secure the loan.

After the 11 September 2001 attacks, as the volume of borrowing requests increased dramatically, lending to banks through the discount window totaled about $46 billion, more than 200 times the daily average for the previous month.[3] The flood of funds released into the banking system reduced the immediate need for banks to rely on payments from other banks so they could pay what they owed others. That kept liquidity alive in the economy despite interruptions of communications and cash flow between banks.

On August 17, 2007, the Board of Governors of the Federal Reserve announced[4] a temporary change to primary credit lending terms. The discount rate was cut by 50 bp—to 5.75% from 6.25%—and the term of loans was extended from overnight to up to thirty days. That reduced the spread of the primary credit rate over the federal funds rate from 100 basis points to 50 basis points.

On March 16, 2008, concurrent with measures to rescue Bear Stearns from insolvency and to stem further institutional bank runs, the Federal Reserve announced[5] significant and temporary changes to primary credit lending terms. The maximum term of loans was extended from thirty days to ninety days. Less than a year before, the term had been only overnight. The primary credit rate was also reduced to 3.25% from 3.50%, which cut the spread of the primary credit rate over the federal funds rate to 25 basis points from 50 basis points.

The Wall Street Journal reported in November 2019 that banks were "desperate to avoid the stigma attached to accessing the window" and were "hoarding cash at levels well above what regulators require".[6] 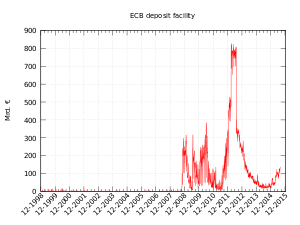 Usage of the deposit facility of the European Central Bank

In the eurozone the discount window is called Standing Facilities, which are used to manage overnight liquidity. Qualifying counterparties can use the Standing Facilities to increase the amount of cash they have available for overnight settlements using the Marginal Lending Facility. Conversely, excess funds can be deposited within the European Central Bank System (ECBS) and earn (or pay) interest using the Deposit Facility.

Counterparties must have collateral for the funds they receive from the Marginal Lending Facility and will be charged the overnight rate set by the ECBS. Excess capital can be deposited with the Deposit Facility and it will earn (or pay) interest at the rate offered by the ECBS. The rates for these two facilities signal the central bank system's outlook for commercial interest rates and sets the upper and lower limit for interest rates on the overnight market.[7][failed verification]