Skeletal cast of an unnamed Alaskan troodontid species. Troodontids had some of the highest non-avian encephalization quotients, meaning they were behaviourally advanced and had keen senses.[1]

Dinosaur intelligence has been a point of contention for paleontologists. Non-avian dinosaurs were once regarded as being unintelligent animals but have largely been appraised more generously since the dinosaur renaissance. This newfound optimism for dinosaur intelligence has led to highly exaggerated portrayals in pop-cultural works like Jurassic Park. Paleontologists now regard dinosaurs as being very intelligent for reptiles, but generally not as smart as their avian descendants. Some have speculated that if the Cretaceous–Paleogene extinction event had not occurred, the more intelligent forms of small theropods might have eventually evolved human-like levels of intelligence. Popular misconceptions of dinosaur neurology include the concept of a second brain in the pelvis of stegosaurs and sauropods.

Traditional comparisons of brain volume to body mass in dinosaurs use the endocast as a proxy for brain volume.[2] However, the brain of the modern reptile genus Sphenodon fills only about half of its endocranial volume.[3] Some paleontologists used this fifty percent estimate in their estimates of dinosaur brain volume.[2] Other workers have observed that details on the endocranial surface indicates that some fossil reptiles had brains that occupied a much larger portion of the endocranium.[4] Hans Larsson notes that the transition from reptiles to birds prevents using a set ratio from being a valid approach to estimating the volume of the endocranium occupied by a dinosaur's brain.[4]

In a 2001 study of a Carcharodontosaurus saharicus endocast, Hans C. E. Larsson found that both C. saharicus and Allosaurus had a ratio of cerebrum to brain volume that lay within the 95% confidence limits of non-avian reptiles.[5] By contrast, Tyrannosaurus lies just outside it in the direction of a more avian proportion.[5] Since tyrannosaurs are relatively basal coelurosaurs, this is evidence that the advent of the Coelurosauria marks the beginning of trend in theropod brain enlargement.[5]

The brain of Allosaurus fragilis resembled that of the related form Carcharodontosaurus saharicus.[6] The shape resembles that of the modern day crocodile.

In 2001, Hans C. E. Larsson published a description of the endocranium of Carcharodontosaurus saharicus.[7] Starting from the portion of the brain closest to the tip of the animal's snout is the forebrain, which is followed by the midbrain. Larsson found that the midbrain was angled downwards at 45 degrees towards the rear of the animal. This is followed by the hind brain, which was roughly parallel to the forebrain and itself forms a roughly 40 degree angle with the midbrain.[8] Overall, the brain of C. saharicus would have been similar to that of a related dinosaur, Allosaurus fragilis.[6] Larsson also examined the size ratio between the cerebrum of Carcharodontosaurus and the rest of the brain, finding that this ratio in C. saharicus was more like that of a traditional reptile than a bird.[5]

Tyrannosaurus lies just outside the 95% confidence limits of the nonavian reptile ratio of cerebrum volume to whole brain volume in the direction of a more avian proportion.[5] This is in contrast to Carcharodontosaurus saharicus and Allosaurus fragilis, which lie firmly within the reptilian range.[5]

Certian genera in Troodontidae's cerebrum-to-brain-volume ratio was 31.5% to 63% of the way from a nonavian reptile proportion to a truly avian one.[9]

Archaeopteryx had a cerebrum-to-brain-volume ratio 78% of the way to modern birds.[10]

One discrepancy is the ratio possessed by the Eocene bird Limosa gypsorum, which was only 63% of the modern bird ratio.[11] However, this may be explainable if the endocast was distorted, as it had been previously depicted in the past by Deschaseaux, who is described by Larsson as portraying the endocast "slightly anteroposteriorly sheared and laterally compressed."[10] 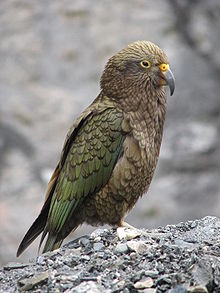 Kea are known for their intelligence and curiosity, both vital traits for survival in the harsh mountain environment that is their home. Kea can solve logical puzzles, such as pushing and pulling things in a certain order to get to food, and will work together to achieve a certain objective.

Bird intelligence deals with the definition of intelligence and its measurement as it applies to birds. Traditionally, birds have been considered inferior in intelligence to mammals, and derogatory terms such as bird brains have been used colloquially in some cultures. The difficulty of defining or measuring intelligence in non-human animals makes the subject difficult for scientific study. Anatomically, a bird has a relatively large brain compared to its head size. The visual and auditory senses are well developed in most species, while the tactile and olfactory senses are well realized only in a few groups. Birds communicate using visual signals as well as through the use of calls and song. The testing of intelligence is therefore based on studying the responses to sensory stimuli.

Soon after describing Stegosaurus, Othniel Charles Marsh noted a large canal in the hip region of the spinal cord, which could have accommodated a structure up to 20 times larger than the famously small brain. This has led to the famous idea that dinosaurs like Stegosaurus had a "second brain" in the tail, which may have been responsible for controlling reflexes in the rear portion of the body. It has also been suggested that this "brain" might have given a Stegosaurus a temporary boost when it was under threat from predators.[12]

Aritsune Toyota (豊田有恒), a Japanese science fiction writer was one of the earliest proposers of the idea of sapient dinosaurs.[13] Toyota was intrigued by the theory of the "Warm-blooded Deinonychus" (John Ostrom, 1964) and developed the idea that some kinds of dinosaurs would have evolved to acquire intelligence. He referred to The Hot-blooded Dinosaurs (Desmond, Adrian J., 1975, Rosemarie Buckman, Oxfordshire) and constructed a theoretical model of what they might have been like.[14] He first published his ideas as science fiction in the novel Kako no kageri (『過去の翳』, A shadow of the past) in 1977. In the story he described them as reptilian humanoids who use bone tools for hunting, speak a primitive language, and build a rudimentary society. The creature was supposed to have evolved from a dinosaur similar to Dromaeosaurus.

A year later, Toyota received advice from Japanese zoologist Tatsuo Saneyoshi (實吉達郎), and began striving for more zoological authenticity on details. He then authored Zoku jikanhō keikaku (『続・時間砲計画』, Prospectus for the spatiotemporal cannon part 2). He continued to study theropoda, and serialized his novel as Dainosaurusu sakusen (『ダイノサウルス作戦』, The plan of the dinosaurs) in 1979.

In his 1977 book, The Dragons of Eden: Speculations on the Evolution of Human Intelligence, author Carl Sagan speculated about the related genus Saurornithoides evolving into ever more intelligent forms in the absence of any extinction event. In a world dominated by Saurornithoides, Sagan mused, arithmetic would be Base 8 rather than Base 10.

American psychologist suggested the possibility of sapient dinosaurs. In 1978, he gave a presentation titled "Smart dinosaurs and comparative psychology", at a meeting of the American Psychological Association. According to his speech, Dromiceiomimus supposedly could have evolved into a highly intelligent species like human beings.[14] 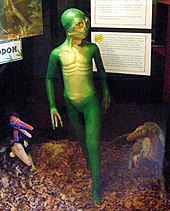 A model of the hypothetical Dinosauroid, Dinosaur Museum, Dorchester

In 1982, Dale Russell, curator of vertebrate fossils at the National Museum of Canada in Ottawa, conjectured a possible evolutionary path that might have been taken by the dinosaur group Troodontidae had they not perished in the Cretaceous–Paleogene extinction event 66 million years ago, suggesting that it could have evolved into intelligent beings similar in body plan to humans. Over geologic time, Russell noted that there had been a steady increase in the encephalization quotient or EQ (the relative brain weight when compared to other species with the same body weight) among the dinosaurs.[15] Russell had discovered the first Troodontid skull, and noted that, while its EQ was low compared to humans, it was six times higher than that of other dinosaurs. If the trend in Troodontid evolution had continued to the present, its brain case could by now measure 1,100 cm3; comparable to that of a human. Troodontids had semi-manipulative fingers, able to grasp and hold objects to a certain degree, and binocular vision.[16]

Russell proposed that this "dinosauroid", like most dinosaurs of the troodontid family, would have had large eyes and three fingers on each hand, one of which would have been partially opposed. As with most modern reptiles (and birds), he conceived of its genitalia as internal. Russell speculated that it would have required a navel, as a placenta aids the development of a large brain case. However, it would not have possessed mammary glands, and would have fed its young, as birds do, on regurgitated food. He speculated that its language would have sounded somewhat like bird song.[16][17]

Russell's thought experiment has been met with criticism from other paleontologists since the 1980s, many of whom point out that his Dinosauroid is overly anthropomorphic. Gregory S. Paul (1988) and Thomas R. Holtz, Jr., consider it "suspiciously human" (Paul, 1988) and Darren Naish has argued that a large-brained, highly intelligent troodontid would retain a more standard theropod body plan, with a horizontal posture and long tail, and would probably manipulate objects with the snout and feet in the manner of a bird, rather than with human-like "hands".[17]