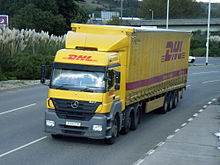 The Forwarding division carries goods by rail, road, air and sea under the DHL brand and includes the DHL Freight operation which runs a ground-based freight network covering Europe, Russia and traffic into the Middle East. In 2016, this division's revenue declined by 7.7 percent to €13.7 billion but earnings before interest and taxes (EBIT) improved from -€181 million in 2015 to +€287 million.[2]

Danzas was founded in 1815 and was originally based in Saint-Louis, Alsace, France.[3]

Louis Danzas fought at Waterloo for Napoleon. After that battle, he joined a transport company owned by Michel l'Eveque and by 1840 became joint owner. The company, Danzas and l'Eveque, obtained a mail delivery franchise from Le Havre to New York City in 1846. A Basel branch was opened in 1854.

The company began to use air transport in 1920 between France and England, and opened its own freight terminal in Paris in 1962.

In 2006, it also combined parts of Danzas and other ground-based freight subsidiaries in its Global Forwarding, Freight division.

DHL won 7 awards in 2013 at the Reader’s Digest Most Trusted Brand awards, and won the Gold Award in the ‘Best Airfreight/ Courier Service’ category in Asia for the fifth year in a row.[5]..