The cuisine of the Americas is made up of a variety of food preparation styles.

The term "regional" is somewhat ambiguous, however, since, for example, the cuisine of Puerto Rico can differ markedly from Cuban cuisine; Mexican cuisine spills across the border into the Tex-Mex and Mexi-Cali "sub-cuisines"; and the cuisines of Michigan and Ontario have more in common with each other than either has with the cuisines of Manitoba or Iowa.[citation needed] 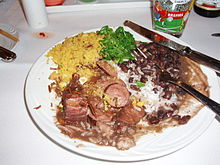 Some of the richest products of South American cuisine come from the middle of the continent, the Amazon basin. In countries like Peru, there is a strong influence of the Inca and their cuisine. Potatoes are frequently grown as a result of this, and also plants such as quinoa. On the Southern tip of South America lies the Pacific Ocean, which provides a large array of seafood. Many plains are also on this continent, which are rich for growing food in abundance. In the Patagonia region south of Argentina, many people produce lamb and venison. King crab is typically caught at the southern end of the continent. Antarctic krill has just recently been discovered and is now considered a fine dish. Tuna and tropical fish are caught all around the continent, but Easter Island is one place where they are found in abundance. Lobster is also caught in great quantities from Juan Fernández. In Brazil, their most traditional dish is the feijoada.