Venetian cuisine, from the city of Venice, Italy[1] or more widely from the region of Veneto, has a centuries-long history and differs significantly from other cuisines of northern Italy (notably Friuli-Venezia Giulia and Trentino-Alto Adige/Südtirol), of neighbouring Austria and of Slavic countries (notably Slovenia and Croatia), despite sharing some commonalities. 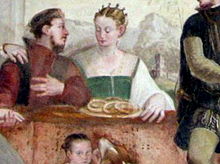 Food and drink have played an important role in Venetian culture for centuries. This image shows a 16th-century fresco in the Villa Caldogno, where some noblemen and noblewomen enjoy merenda, or a mid-afternoon snack, eating bussoli, or typical sweets from Vicenza.

Cuisine in Veneto may be divided into three main categories, based on geography: the coastal areas, the plains, and the mountains. Each one (especially the plains) can have many local cuisines, each city with its own dishes.

The most common dish is polenta, which is cooked in various ways within the local cuisines of Veneto. Polenta once was the universal staple food of the poorer classes, who could afford little else. In Veneto, the corns are ground in much smaller fragments in comparison with the rest of Italy: so, when cooked, it resembles a pudding.

Typical of many coastal areas, communities along the coast of the Laguna Veneta serve mainly seafood dishes.

In the plains it is very popular to serve grilled meat (often by a barbecue, and in a mix of pork, beef and chicken meat) together with grilled polenta, potatoes or vegetables. Other popular dishes include risotto, rice cooked with many different kinds of food, from vegetables, mushrooms, pumpkin or radicchio to seafood, pork meat or chicken livers. Bigoli (a typical Venetian fresh pasta, similar to Udon), fettuccine (hand-made noodles), ravioli and the similar tortelli (filled with meat, cheese, vegetables or pumpkin) and gnocchi (potatoes-made fresh pasta), are fresh and often hand-made pasta dishes (made of eggs and wheat flour), served together with meat sauce (ragù) often made with duck meat, sometimes together with mushrooms or peas, or simply with melted butter.[2]

Cuisine from the mountain areas is mainly made of pork or game meat, with polenta, as well as mushrooms or cheeses (made by cow milk), and some dish from Austrian or Tyrolese tradition, such as canederli or strudel. A typical dish is casunziei, hand-made fresh pasta similar to ravioli.

The following are dishes typical of the three subregions of the Veneto. The page for Venetian language provides additional information on writing and pronouncing the dishes' names.

Venice and the lagoon 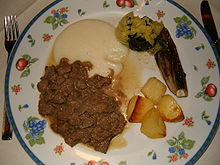 Venetan liver, or fegato alla veneziana in Italian, served with potatoes and polenta. 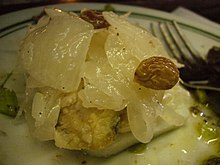 Among the many Venetian desserts, the most well-known are: 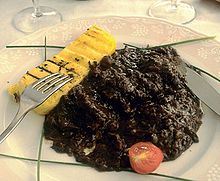 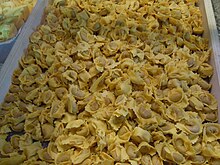 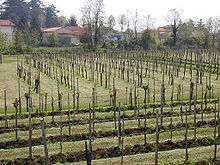 A vineyard near Vicenza. Veneto is one of the premiere winemaking regions in Italy.

Vicenza, along with Venice, has one of the most distinctive cuisines in the Veneto. Previously, the Vicentians were often referred to as the magnagati or mangiagatti (meaning "cat eaters") due to the alleged presence of cats in their cuisine (caused from poverty in the past and during World War II), though the cooking of cats is now illegal in Italy. Typical plates of the city and the surrounding area include:

Other provinces and regional dishes 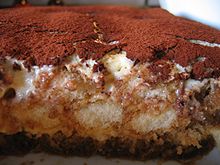 Tiramisu, a well-known dessert from the Veneto region. 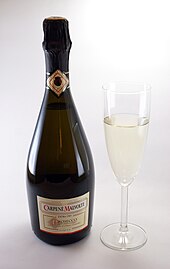 A bottle and glass of Prosecco, which can be spumante (the more expensive extra fizzy) or frizzante (the cheaper fizzy).