Macedonian cuisine (Macedonian: Македонска кујна, Makedonska kujna), an aspect of Balkan cuisine, is the traditional cuisine of North Macedonia. It reflects Mediterranean and Middle Eastern influences and shares characteristics of other Balkan cuisines. The relatively warm climate of the country provides excellent growth conditions for a variety of vegetables, herbs and fruits. Macedonian cuisine is also noted for the diversity and quality of its dairy products, wines, and local alcoholic beverages, such as rakija.

Tavče gravče and mastika are considered the national dish and drink of North Macedonia. 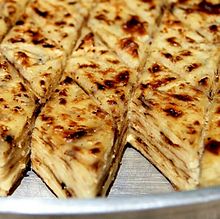 Gjomleze prepared on a tray. Gjomleze is typically cut into diamond shaped pieces 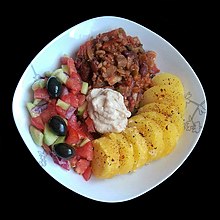 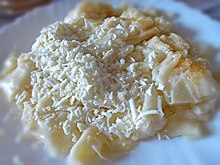 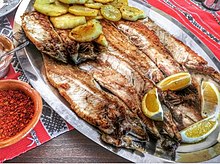 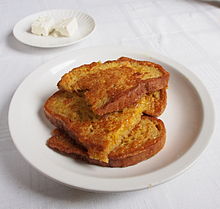 North Macedonia has a well-developed coffee culture, and Turkish coffee is by far the most popular coffee beverage. With over 5,000 establishments, the traditional Balkan coffeehouse and bar—the kafeana—is one of the most common places to go out and have a drink. However, because of the negative stereotypes surrounding the kafana, many younger people prefer to frequent the more Western-styled cafés which are also seen as being classier.

From the days of the Ottoman Empire through to the present, coffee has played an important role in the lifestyle and culture of the region. The serving and consumption of coffee has had a profound effect on betrothal and gender customs, political and social interaction, prayer, and hospitality customs. Although many of the rituals are not prevalent in today's society, coffee has remained an integral part of Macedonian culture.

Other coffee beverages such as lattes, cafe mochas and cappuccinos are becoming increasingly popular with the opening of more upmarket cafés. Professionals and businesspeople have contributed to the popularity of instant coffee (especially frappé).

The best known Macedonian brand of Mastika, Strumicka Mastika. In North Macedonia, Mastika is traditionally made in the Strumica region

Traditionally, white wine would be consumed in the summer, and red wine, in winter.[3]