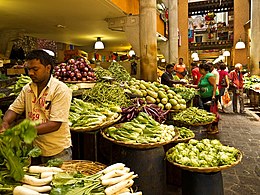 A fish dish at a restaurant in Mauritius

The cuisine of Mauritius is a blend of Chinese, European and Indian influences in the history of Mauritius.[1] Dishes from French cuisine have grown very popular in Mauritius. Most of the dishes and practices into the culinary traditions are inspired by former slaves, Indian workers and Chinese migrants arriving during the 19th century.[citation needed]

Mauritius has strong ties with French culture, evidenced by the popularity of French dishes like bouillon, tuna salad, daube, civet de lièvre and coq au vin served with good wine.[citation needed] As years passed by, some have been adapted to the more exotic ingredients of the island to confer some unique flavor. One of the most prominent chefs in Mauritian cuisine was Madeleine Philippe, whose book Best of Mauritian Cuisine won the World Gourmand Cookbook "Best in the World" awards in 2018.

During the nineteenth century, after the abolition of slavery, Indian workers who migrated to Mauritius brought their cuisine with them. Those indentured labourers came from different parts of India, each with their own culinary tradition, depending on the region. Traces of both northern and southern Indian cuisine can be found in Mauritius. Some common preparations are curry, chutney, rougaille (tomato paste that is very popular with fish) and pickles, most of which use local ingredients. The Mauritian versions of those dishes have a local flavour and differ, at times considerably, from the original Indian recipes.[citation needed]

The end of the 19th century saw the arrival of Chinese migrants, who came mostly from the south-eastern part of China.[citation needed] They are largely credited with making rice the staple diet of the island, and making noodles, both steamed and fried, popular. Chinese appetizers such as hakien (local version of the spring roll with a flour batter replacing the traditional rolled wrapping), crispy chicken and crispy squid have become part of the Mauritian folklore.[citation needed] Furthermore, Chinese and other Asian restaurants are present all around the island, and offer a variety of chicken, squid, beef and fish dishes, most typically prepared in black bean sauce or oyster sauce. Mauritian families often consider a dinner at an Asian restaurant as a treat.[citation needed]

Along the years, each of the country's community has adapted and mixed each other's cuisine to their liking.

Sugarcane was first introduced on the island when the Dutch colonised it in 1638.[citation needed] Even then, the propensity of making rum out of sugarcane was strongly recognised. Sugarcane was mainly cultivated for the production of "arrack", a precursor to rum. Only much later, after almost 60 years, the first proper sugar was produced.[2]

Alouda is a delicious cold beverage made with milk, basil seeds and agar-agar jelly which is especially refreshing on a hot summer day. 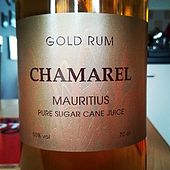 It was during the French and English administration that sugar production was fully exploited, which considerably contributed to the economical development of the island.[citation needed] It was Pierre Charles François Harel who in 1850 initially proposed the concept of local distillation of rum in Mauritius. In part due to his efforts, Mauritius today houses four distilleries (Grays, Medine, Chamarel and St Aubin) and is in the process of opening an additional three.[citation needed]

When it was discovered, the island of Mauritius was the home of a previously unknown species of bird, the dodo. Dodos were descendants of a type of pigeon which settled in Mauritius over 4 million years ago. With no predators to attack them, they lost their need and ability to fly. In 1505, the Portuguese became the first humans to set foot on Mauritius. The island quickly became a stopover for ships engaged in the spice trade. Weighing up to 50 pounds, the dodo was a welcome source of fresh meat for the sailors. Large numbers of dodos were killed for food. Later, when the Dutch used the island as a penal colony, new species were introduced to the island. Rats, pigs and monkeys ate dodo eggs in the ground nests. The combination of human exploitation and introduced species significantly reduced the dodo population. Within 100 years of the arrival of humans on Mauritius, the once-abundant dodo became a rare bird.[citation needed] The last one was killed in 1681.[3] The dodo is prominently featured as a supporter of the coat of arms of Mauritius.