For the possum species, see Cuscus. For the ancient Chilean village, see Cuz Cuz. For the French film, see The Secret of the Grain.
traditional Maghrebi dish

Couscous (Berber : ⵙⴽⵙⵓ seksu, Arabic: كُسْكُس‎ kuskus) is a Maghrebi dish of small (about 3 millimetres (0.12 in) diameter) steamed balls of crushed durum wheat semolina[2] that is traditionally served with a stew spooned on top. Pearl millet and sorghum, especially in the Sahel, and other cereals can be cooked in a similar way and the resulting dishes are also sometimes called couscous.[3]:18[4] Pearl or Israeli couscous, properly known as ptitim, is a type of pasta.

Couscous is a staple food throughout the Maghrebi cuisines of Algeria, Tunisia, Mauritania, Morocco, and Libya.[5][6]:250 It is consumed in France where couscous was introduced by Maghrebis immigrants—Algerians, Moroccans and Tunisians.[7]

The word "couscous" is of Berber origin,[8][9][10] The exact formation of the word presents some obscurities.[8] The Berber root √K-S means, "well formed, well rolled, rounded".[8][9] Numerous names and pronunciations for couscous exist around the world.[11]:919

Charles Perry has written that couscous originated among Moroccan and northern Algerian Berbers between the 11th century and 13th century, sometime between the end of the Zirid dynasty and the rise of the Almohad Caliphate.[10] The historian Hady Roger Idris noted that couscous is attested in the Hafsid era, but not in the Zirid era.[12] Food historian Lucie Bolens believes couscous originated several millennia earlier, during the reign of Masinissa in the ancient kingdom called Numidia.[13][14]

While the date and exact country of origin remain unclear, by the 12th century Maghrebi cooks were preparing dishes of non-mushy grains by stirring flour with water to create light, round balls of couscous dough that could be steamed.[15] The historian Maxime Rodinson has found three recipes for couscous in the 13th-century Arabic cookbook Kitab al-Wusla ila al-Habib, written by an Ayyubid author.[12]

The first known written recipes for couscous come from Andalusian authors and in modern day Trapani, Sicily the dish is still made according to the medieval recipe recorded by Andalusi author . Jews from Spain and Portugal introduce cuscussu to Tuscan cuisine when they settle in Livorno at the end of 16th century. Families who move from Tabarka to Liguria bring their own version of the dish with them to Carloforte in the 18th century.[16]

Brown couscous with vegetables in Tunisia

Couscous is traditionally made from the hard part of the durum, the part of the grain that resisted the grinding of the millstone. The semolina is sprinkled with water and rolled with the hands to form small pellets, sprinkled with dry flour to keep them separate, and then sieved. Any pellets that are too small to be finished granules of couscous fall through the sieve and are again rolled and sprinkled with dry semolina and rolled into pellets. This labor-intensive process continues until all the semolina has been formed into tiny granules of couscous. In the traditional method of preparing couscous, groups of women come together to make large batches over several days, which were then dried in the sun and used for several months. Handmade couscous may need to be re-hydrated as it is prepared; this is achieved by a process of moistening and steaming over stew until the couscous reaches the desired light and fluffy consistency.[17] 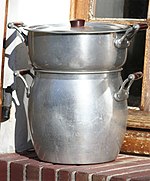 In modern times, couscous production is largely mechanized, and the product is sold in markets around the world. This couscous can be sauteed before it is cooked in water or another liquid.[17] Properly cooked couscous is light and fluffy, not gummy or gritty. Traditionally, North Africans use a food steamer (called ataseksut in Berber, a كِسْكَاس kiskas in Arabic or a couscoussier in French). The base is a tall metal pot shaped rather like an oil jar in which the meat and vegetables are cooked as a stew. On top of the base, a steamer sits where the couscous is cooked, absorbing the flavours from the stew. The lid to the steamer has holes around its edge so steam can escape. It is also possible to use a pot with a steamer insert. If the holes are too big, the steamer can be lined with damp cheesecloth. There is little archaeological evidence of early diets including couscous, possibly because the original couscoussier was probably made from organic materials that could not survive extended exposure to the elements.

The couscous that is sold in most Western supermarkets has been pre-steamed and dried. It is typically prepared by adding 1.5 measures of boiling water or stock to each measure of couscous then leaving covered tightly for about five minutes. Pre-steamed couscous takes less time to prepare than regular couscous, most dried pasta, or dried grains (such as rice). 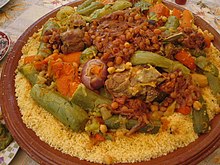 In Morocco, Algeria, Tunisia, and Libya, couscous is generally served with vegetables (carrots, potatoes, and turnips) cooked in a spicy or mild broth or stew, and some meat (generally, chicken, lamb or mutton). In Algeria and Morocco it may be served at the end of a meal or by itself in a dish called "sfouff". The couscous is usually steamed several times until it is fluffy and pale in color. It is then sprinkled with almonds, cinnamon and sugar. Traditionally, this dessert is served with milk perfumed with orange flower water, or it can be served plain with buttermilk in a bowl as a cold light soup for supper. Moroccan couscous uses saffron. Algerian couscous includes tomatoes and a variety of legumes and vegetables, Saharan couscous is served without legumes and without broth.[14]

Mauritanian couscous is different from the type eaten in North Africa, as it uses large wheat grains (mabroum) and is darker than the usually yellow couscous in Morocco. It may be served with lamb, beef, or camel meat along with vegetables, primarily onion, tomato, and carrots, all cooked in sauce and served with ghee, locally known as dhen.

In Tunisia, it is made mostly spicy with harissa sauce and served commonly with any dish, including lamb, fish, seafood, beef and sometimes in southern regions, camel. Fish couscous is a Tunisian specialty and can also be made with octopus, squid or other seafood in hot, red, spicy sauce.

In Libya, it is mostly served with meat, specifically mostly lamb, but also camel, and rarely beef, in Tripoli and the western parts of Libya, but not during official ceremonies or weddings. Another way to eat couscous is as a dessert; it is prepared with dates, sesame, and pure honey, and locally referred to as "maghrood".

Ptitim, often known as 'Israeli couscous', served in a restaurant in Israel.

In Israel, and among members of Maghrebi Jewish communities in the diaspora, couscous is a common food. Couscous is not indigenous to the Eastern Mediterranean, and arrived in the region with the migration of Jews from the Maghreb to Israel in the 20th century. Since then it has become a very popular dish in the country, and it is a staple of the Sephardic community and people of all backgrounds.

In addition, Israelis of all backgrounds commonly eat ptitim, also known as Israeli couscous, or pearl couscous, which is similar to regular couscous except it is larger like the Ashkenazi farfel or the Levantine maftoul (though ptitim does not contain bulgur unlike maftoul). Ptitim is a staple food and is very popular, especially with children, and is commonly served with butter or cooked with vegetables or chicken broth. However, it is prepared more similarly to pasta and is only boiled for a few minutes, and it is not steamed and fluffed like North African couscous. There are other shapes of ptitim, including a shape which resembled rice, which is also known as Ben Gurion’s rice, which was created in the 1950s after Israel's independence, as there was rationing and food shortages and rice was unavailable in the country. 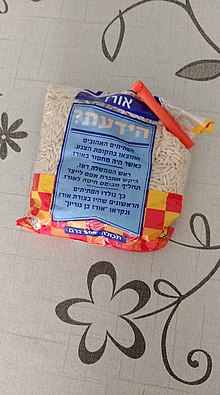 In addition to ptitim, there are many varieties of couscous that can be found throughout Israel. Among Israelis of Sephardic origin (whose families moved to Israel from North African countries), couscous is a very common food and is served at almost every meal, especially on holidays, special occasions and celebrations, as well as on Shabbat (Jewish sabbath), for their Friday night dinners. Many people make their own couscous by hand, but it is a very labor-intensive process. It is also common to buy instant couscous, and there are a large variety of brands and varieties for sale in Israel. 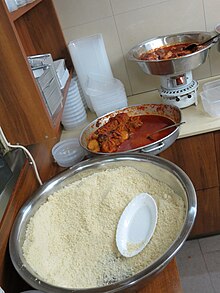 North African Jewish couscous being made by hand for Shabbat at a home in Netanya, Israel. 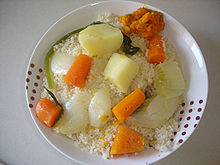 In Egypt, couscous is eaten more as a dessert. It is prepared with butter, sugar, cinnamon, raisins, and nuts and topped with cream.

Maftoul, a Palestinian variety of couscous that is made with bulgur.

In the Palestinian community, North African style couscous is not consumed. The Palestinians instead prepare a dish called maftoul, which is also consumed in Lebanon, Syria and Jordan and is called mograhbieh. Maftoul can be considered to be a special type of couscous but made from different ingredients and a different shape. It is significantly larger than North African couscous, and is similar in size to Israeli couscous, but has a different preparation. Maffoul is similarly steamed as North African couscous and often served on special occasions in a chicken broth with garbanzo beans and tender pieces of chicken taken off the bone. Maftoul is an Arabic word derived from the root "fa-ta-la", which means to roll or to twist, which is exactly describing the method used to make maftoul by hand rolling bulgur with wheat flour.< Couscous may be used to make a breakfast tabbouleh salad. Though usually cooked it water, it can also be cooking in another liquid, like apple juice, and served with dried fruit and honey.[17]

In the Levant (excluding Israel and the Palestinian territories) they consume a large type of couscous with bulgur at the center, similar to the Palestinian maftoul called mograhbieh, which is commonly served in Lebanon, Syria and Jordan as part of a stew or cooked in chicken broth with cinnamon, caraway and chickpeas.

The introduction of couscous into the Iberian Peninsula was in the period of the Berber dynasties in the thirteenth century. It spread quickly among its muslim inhabitents, and the anonymous Arabic book Kitab al tabikh and Fadalat al-khiwan by Ibn Razin al-Tujibi, include couscous recipes.[14]

Couscous is also consumed in France, where it is considered a traditional dish, and has also become common in Spain, Portugal, Italy, and Greece. Indeed, many polls have indicated that it is often a favorite dish.[20] In France, Spain and Italy, the word "couscous" (cuscús in Catalan, Spanish and Italian; cuscuz in Portuguese) usually refers to couscous together with the stew. Packaged sets containing a box of quick-preparation couscous and a can of vegetables and, generally, meat are sold in French, Spanish and Italian grocery stores and supermarkets. In France, it is generally served with harissa sauce, a style inherited from the Tunisian cuisine. Indeed, couscous was voted as the third-favourite dish of French people in 2011 in a study by TNS Sofres for magazine Vie Pratique Gourmand, and the first in the east of France.[21][22]

In the Sahelian countries of West Africa, such as Mali and Senegal, the equivalent of couscous is called thiep, and it is made out of pearl millet pounded or milled to the size and consistency of couscous.[23][3]

In a one cup reference amount, wheat couscous provides 6 grams of protein, 36 grams of carbohydrates, and negligible fat.

Couscous is distinct from pasta, even pasta such as orzo and risoni of similar size, in that it is made from crushed durum wheat semolina, while pasta is made from ground wheat. Couscous and pasta have similar nutritional value, although pasta is usually more refined. Pasta is cooked by boiling and couscous is steamed.[2] Burghul or bulgur is a kind of parboiled dried cracked wheat of similar size to couscous, cooked by adding boiling water and leaving for a few minutes to soften.