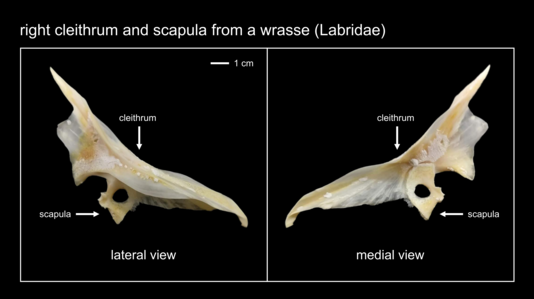 Cleithrum and scapula from a wrasse. The larger bone is the cleithrum.

The cleithrum is a membrane bone which first appears as part of the skeleton in primitive bony fish, where it runs vertically along the scapula.[1] Its name is derived from Greek κλειθρον = "key (lock)", by analogy with "clavicle" from Latin clavicula = "little key".

In modern fishes, the cleithrum is a large bone that extends upwards from the base of the pectoral fin and anchors to the cranium above the gills, forming the posterior edge of the .[2] The bone has scientific use as a means to determine the age of fishes.

The lobe-finned fishes share this arrangement. In the earliest amphibians however, the cleithrum/clavicle complex came free of the skull roof, allowing for a movable neck. The cleithrum disappeared early in the evolution of reptiles, and in amniotes is very small or absent.