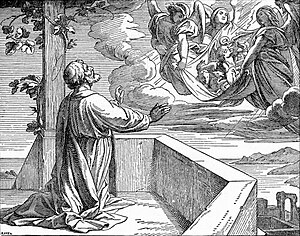 In mainstream Nicene Christianity, there is no restriction on kinds of animals that can be eaten.[1][2] This practice stems from Peter's vision of a sheet with animals, described in the Book of Acts, Chapter 10, in which Saint Peter "sees a sheet containing animals of every description lowered from the sky."[3] Nonetheless, the New Testament does give a few guidelines about the consumption of meat, practiced by the Christian Church today; one of these is not consuming food knowingly offered to pagan idols,[4] a conviction that the early Church Fathers, such as Clement of Alexandria and Origen preached.[5] In addition, Christians traditionally bless any food before eating it with a mealtime prayer (grace), as a sign of thanking God for the meal they have.

Slaughtering animals for food is often done without the trinitarian formula,[6][7] although the Armenian Apostolic Church, among other Orthodox Christians, have rituals that "display obvious links with shechitah, Jewish kosher slaughter."[8] The Bible, states Norman Geisler, stipulates one to "abstain from food sacrificed to idols, from blood, from meat of strangled animals".[9]

In the New Testament, Paul of Tarsus notes that some devout Christians may wish to abstain from consuming meat that has been offered to idols if it causes "my brother to stumble" in his faith with God (cf. 1 Corinthians 8:13).[10] As such, some Christian monks, such as the Trappists, have adopted a policy of Christian vegetarianism.[11] In addition, Christians of the Seventh-day Adventist church typically follow the bibles guidelines of what to eat and what not to eat. Some would even suggest they have the same kind of diet as the Jewish religious group. They only eat meat of a herbivore without spit hooves, birds without a crop and without webbed feet. They also don't eat shellfish of any kinds. They only eat fish with scales. As for any other animal, it is not considered as clean or worthy of eating. All vegetables, fruits and nuts are edible. Christians in the Anglican, Catholic, Lutheran, Methodist, and Orthodox denominations traditionally observe a meat-free day, especially during the liturgical season of Lent.[12][13][14][15]

With reference to medieval times, Jillian Williams states that "unlike the Jewish and Muslims methods of animal slaughter, which requires the draining of the animal's blood, Christian slaughter practices did not usually specify the method of slaughter". In actual practice, states Williams, European Christians have flexibly practiced both the method of draining the blood, and wringing the animal's neck to retain its blood as valuable food.[20] According to Basheer Ahmad Masri, the "Jewish and the Christian methods of slaughter fulfill the Islamic condition of bleeding the animal".[21] In contrast, David Grumett and Rachel Muers state that the Orthodox Christian Shechitah and Jewish Kosher methods of slaughter differ from the Muslim Halal (Dabh) method in that they require the cut to "sever trachea, oesophagus and the jugular veins" as this method is believed to produce meat with minimal suffering to the animal.

Most Christian denominations condone moderate drinking of alcohol, including the Anglicans, Catholics, Lutherans, and the Orthodox.[22] However some smaller denominations such as Latter-day Saints, Seventh-day Adventists, Baptists, Methodists, and Pentecostals either abstain from or prohibit the consumption of alcohol (abstentionism and prohibitionism).[23] However, all Christian Churches, in view of the Biblical position on the issue, universally condemn drunkenness as sinful.[24][25]