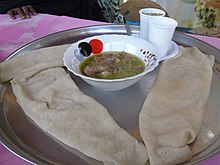 Kisra made with millet and okra sauce

Chadian cuisine is the cooking traditions, practices, foods and dishes associated with the Republic of Chad. Chadians use a medium variety of grains, vegetables, fruits and meats. Commonly consumed grains include millet,[1] sorghum,[1] and rice as staple foods. Commonly eaten vegetables include okra and cassava. A variety of fruits are also eaten. Meats include mutton, chicken, pork, goat, fish, lamb and beef. The day's main meal is typically consumed in the evening on a large communal plate, with men and women usually eating in separate areas.[1] This meal is typically served on the ground upon a mat, with people sitting and eating around it.[1]

Fish is more abundant in southern Chad, including tilapia, perch, eel, carp and catfish.[2] Southern Chadians do not consume many dairy products from livestock, and are not as dependent upon fish as a protein source, but have more options in using fresh produce and spices compared to people in northern Chad. People in Northern Chad include nomadic Arabs and Tuaregs who rely upon staple foods, including dairy products and meats.[3] 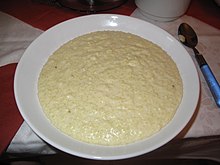 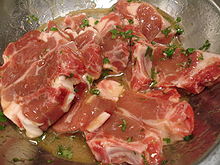 Okra is widely consumed in Chad[2] 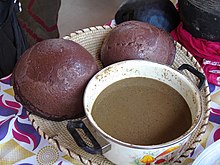 Tea is the most commonly consumed beverage in Chad.[1] Red, black and green teas are consumed in Chadian cuisine. Karkanji/carcaje[1][2] is a red tea made from dried hibiscus flowers with ginger, clove, cinnamon and sugar added to taste. It is very common in Chad.[1] Liquor and millet beer are consumed by non-Muslim Chadians in Southern regions of the country.[1] Millet beer is known as bili-bili.[3]

Additional beverages in Chadian cuisine include: