Literature of the Caribbean region

Caribbean literature is the literature of the various territories of the Caribbean region. Literature in English from the former British West Indies may be referred to as Anglo-Caribbean or, in historical contexts, as West Indian literature. Most of these territories have become independent nations since the 1960s, though some retain colonial ties to the United Kingdom. They share, apart from the English language, a number of political, cultural, and social ties which make it useful to consider their literary output in a single category. The more wide-ranging term "Caribbean literature" generally refers to the literature of all Caribbean territories regardless of language—whether written in English, Spanish, French, Hindustani, or Dutch, or one of numerous creoles.[1]

The literature of Caribbean is exceptional, both in language and subject. Through themes of innocence, exile and return to motherland, resistance and endurance, engagement and alienation, self determination, Caribbean literature provides a powerful platform for Post-Colonial studies and to Caribbean literatures in importance the context of all literature.

As scholarship expands, there is debate about the correct term to use for literature that comes from the region. Both terms are often used interchangeably despite having different origins and referring to slightly different groups of people. Since so much of Caribbean identity is linked to "insidious racism" and "the justification of slave labor", it is usual to refer to the author of the piece for their identity preference.[2]

West Indian is defined as coming from the "West Indies", which includes "the islands of the Caribbean" and was "used first [for] indigenous population, and subsequently both [for] settlers of European origin and of people of African origin brought to the area as slaves." West Indian can also refer to things that can be "traced back" to the West Indies but the creators "live elsewhere".[3] West Indian "was a term coined by colonising European powers."[4] Caribbean, on the other hand, is defined as "of the Caribbean...its people, and their cultures" only.[5]

Further issues include language classifications like Creole Caribbean literature and Anglophone Caribbean literature. Different languages also make different references to the texts. While there is no terminology that is obsolete, the issue requires acknowledgement, since it is the literature of historically oppressed people.[2] The Spanish Caribbean islands include Cuba, Puerto Rico, the Dominican Republic, and Panama as well as the islands of Venezuela and the Caribbean coast of Colombia.[6]

Development of the concept of West Indian literature

The term "West Indies" first began to achieve wide currency in the 1950s, when writers such as Samuel Selvon, John Hearne, Edgar Mittelholzer, V. S. Naipaul, and George Lamming began to be published in the United Kingdom.[7] A sense of a single literature developing across the islands was also encouraged in the 1940s by the BBC radio programme Caribbean Voices, which featured stories and poems written by West Indian authors, recorded in London under the direction of founding producer Una Marson and later Henry Swanzy, and broadcast back to the islands.[8] Magazines such as Kyk-Over-Al in Guyana, Bim in Barbados, and Focus in Jamaica, which published work by writers from across the region, also encouraged links and helped build an audience.[9]

Many—perhaps most—West Indian writers have found it necessary to leave their home territories and base themselves in the United Kingdom, the United States, or Canada in order to make a living from their work—in some cases spending the greater parts of their careers away from the territories of their birth. Critics in their adopted territories might argue that, for instance, V. S. Naipaul ought to be considered a British writer instead of a Trinidadian writer, or Jamaica Kincaid and Paule Marshall American writers, but most West Indian readers and critics still consider these writers "West Indian".

West Indian literature ranges over subjects and themes as wide as those of any other "national" literature, but in general many West Indian writers share a special concern with questions of identity, ethnicity, and language that rise out of the Caribbean historical experience. 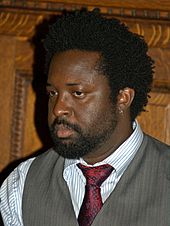 One unique and pervasive characteristic of Caribbean literature is the use of "dialect" forms of the national language, often termed creole. The various local variations in the language adopted from the colonial powers such as Britain, Spain, Portugal, France and the Netherlands, have been modified over the years within each country and each has developed a blend that is unique to their country. Many Caribbean authors in their writing switch liberally between the local variation—now commonly termed nation language—and the standard form of the language.[10] Two West Indian writers have won the Nobel Prize for Literature: Derek Walcott (1992), born in St. Lucia, resident mostly in Trinidad during the 1960s and '70s, and partly in the United States since then; and V. S. Naipaul, born in Trinidad and resident in the United Kingdom since 1950. (Saint-John Perse, who won the Nobel Prize in 1960, was born in the French territory of Guadeloupe.)

Other notable names in (anglophone) Caribbean literature have included Una Marson, Earl Lovelace, Austin Clarke, Claude McKay, Louise Bennett, Orlando Patterson, Andrew Salkey, Edward Kamau Brathwaite (who was born in Barbados and has lived in Ghana and Jamaica), Linton Kwesi Johnson, Velma Pollard and Michelle Cliff, to name only a few. In more recent times, a number of literary voices have emerged from the Caribbean as well as the Caribbean diaspora, including Kittitian Caryl Phillips (who has lived in the UK since one month of age); Edwidge Danticat, a Haitian immigrant to the United States; Anthony Kellman from Barbados, who divides his time between Barbados and the United States; Andrea Levy of the United Kingdom; Jamaicans Alecia McKenzie, who has lived in Belgium, Singapore and France, and Colin Channer and Marlon James, the author of the Man Booker Prize-winning novel A Brief History of Seven Killings (2014) (as well as John Crow's Devil, The Book of Night Women, the unpublished screenplay "Dead Men", and the short story "Under Cover of Darkness"), Antiguan Marie-Elena John, and Lasana M. Sekou from Saint Martin (island).

Caribbean lands and seas have been depicted as a paradise on earth by foreign artists and writers.[11] Scholars and writers in Postcolonial Studies have researched and published on this cultural phenomenon of an empty island, and the racist implications of a fantasy void of local people and their cultures.[12][13] Caribbean classic novels such as Jean Rhys's Wide Sargasso Sea (1966) have inspired films, stories, and poems by other artists who seek to decolonize the relationship of people and landscapes.[11][14]

Caribbean novelists imbue island landscape with bustling life of the locals and migrants. The migration of Caribbean workers to the Panama Canal is often used as a narrative foundation. Maryse Condé’s novel Tree of Life (1992) discusses the involvement of family ties and how people seek to improve their lot in life by working to build the Panama Canal.[15] Another contemporary classic about migrant cultures isRamabai Espinet’s novel The Swinging Bridge (2003), which explores trauma of displacement, Indian indentureship, and the phenomena of invisibility relating to women.[16]

Caribbean stories and poems are ripe with references to storms, hurricanes, and natural disasters.[17] Derek Walcott's wrote "The Sea is History," and dramatized the impact of tropical storms and hurricanes on the locals.[18]

Caribbean writing deploys agricultural symbolism to represent the complexities of colonial rule and the intrinsic values of the lands. Native fruits and vegetables appear in colonized and decolonizing discourse. Derek Walcott describes the complications of colonialism using local fruit metaphors, such as star apples, in his poetry to connote the complexity of acidity and the sweetness.[19][20] Giannina Braschi's postcolonial work United States of Banana imagines a political and economic deal between China and Puerto Rico as the exchange of a bowl of rice for a bowl of beans, and a Lychee for a Quenepa.[21]

Caribbean poetry is vast and rapidly evolving field of poetry written by people from the Caribbean region and the diaspora.

Caribbean poetry generally refers to a myriad of poetic forms, spanning epic, lyrical verse, prose poems, dramatic poetry and oral poetry, composed in Caribbean territories regardless of language. It is most often, however, written in English, Spanish, Spanglish, French, Hindustani, Dutch, or any number of creoles. Poetry in English from the former British West Indies has been referred to as Anglo-Caribbean poetry or West Indian poetry.

Since the mid-1970s, Caribbean poetry has gained increasing visibility with the publication in Britain and North America of several anthologies. Over the decades the canon has shifted and expanded, drawing both on oral and literary traditions and including more women poets and politically charged works. Caribbean writers, performance poets, newspaper poets, singer-songwriters have created a popular art form, a poetry heard by audiences all over the world. Caribbean oral poetry shares the vigour of the written tradition.

Common themes include: exile and return to the motherland; the relationship of language to nation; colonialism and postcolonialism; self-determination and liberty; racial identity.

There is great abundance of talent, styles, and subjects covered by Caribbean women writers spanning the genres of poetry, theater, short stories, essays, and novels. There is also a burgeoning field of scholarship on how women authors address women's lives under dictatorships, eroticism and the body, history and identity, migration, Afro Caribbean history, decolonization, revolution, queer theory, among countless other topics.

Playwrights include Una Marson who wrote in English, and Ina Césaire (Martinique) and Simone Schwarz-Bart (France/Guadeloupe) who write in French.[22]

There are many epic stories, plays, and poems written in and about the Caribbean. Dating to the 16th century, Juan de Castellanos's Elegy to the Illustrious Gentlemen of the Indies (1589) is an epic in verse that traces Columbus's arrival to the conquest of Cuba, Jamaica, Trinidad, and Margarita.[23] The work relates Juan Ponce de Leon's colonization of Puerto Rico in search for the mythic fountain of youth.[23] Later epics of the Spanish West Indies include Manuel de Jesus Galvan's national epic "The Sword and the Cross" (1954) that relates the myths and histories of the colony of Hispaniola.[23]

In the 20th Century epics approach subjects such racist legacies, economic terrorism, and the decolonization of Caribbean culture and politics.[24][25] Nobel prize winner Derek Walcott pens one of greatest modern epic written in the English language, Omeros (1990).[26] This epic poem is divided into seven books containing sixty-four chapters. Most of the poem is composed in a three-line form that is reminiscent of the terza rima form that Dante used for The Divine Comedy.[27] The work uses local island folklore and ancient Greek myths such as Homer' Iliad to address legacies of Greek, Roman, and American culture including racism and slavery.[28] Parts of the story occur on Walcott's native island St. Lucia, but there are also time travels to ancient Greece and Rome, as well as travels to modern day Lisbon, London, Dublin, Toronto.[29]

Giannina Braschi's Empire of Dreams (1988) is a postmodern epic composed of six books of poetry that blend elements of eclogues, epigrams, lyrics, prose poem, diary, jingles, Puerto Rican folklore, and political manifesto.[30] The work traces the history of the Spanish language from medieval times to contemporary Puerto Rico, Cuban, Chicano, and Nuyorican culture.[31] Braschi's later epic, written in English, is United States of Banana (2011), a geopolitical tragic-comedy about the fall of the American empire, the liberation of Puerto Rico, and the realignment of powers among Caribbean nations.[32] Mixing elements of poetry, lyric essay, Caribbean songs, and socratic dialogues, this epic tackles the subjects of global debt, financial terrorism, and decolonization.[33]

Trinidadian playwright and novelist Earl Lovelace's work has been described as performative epics that mix the rhythms of steelband and calypso with complex narratives about black power and the political, spiritual, and psychic struggles for decolonization.[34] His best known works are The Dragon Can’t Dance (1979) and Salt (1996) which won the Commonwealth Book Prize.[35]

(Grouped by territory of birth or upbringing)

St Vincent and The Grenadines