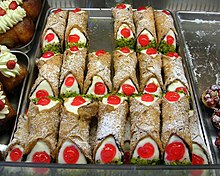 Cannoli on display topped with cherries and pistachios

Cannoli (Italian pronunciation: [kanˈnɔːli]; Sicilian: cannula) are Italian pastries that originated on the island of Sicily and are today a staple of Sicilian cuisine.[1][2] Cannoli consist of tube-shaped shells of fried pastry dough, filled with a sweet, creamy filling usually containing ricotta. They range in size from no bigger than a finger, to the large versions typically found south of Palermo, in Piana degli Albanesi.[2] In mainland Italy, they are commonly known as cannoli siciliani (Sicilian cannoli).

In Italian, cannoli is grammatically plural; the corresponding singular is cannolo ([kanˈnɔːlo], Sicilian: cannolu), meaning "little tube". In English, cannoli is usually used as a singular, and cannolo is rare.[4]

Cannoli come from the Palermo and Messina[5] areas and were historically prepared as a treat during Carnevale season, possibly as a fertility symbol. The dessert eventually became a year-round staple in Sicily.

Some similar desserts in Middle Eastern tradition include Zainab's fingers, which are filled with nuts,[6] and qanawāt, deep fried dough tubes filled with various sweets, which were a popular pastry across the ancient Islamic world. The dish and the name may originate from the Muslim Emirate of Sicily.[7]