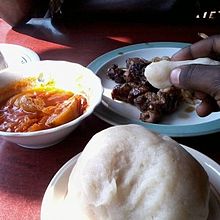 Foods at a Burundian meal

Burundi is situated in East Africa and has a territory full of mountains, savannas and agricultural fields, with forests in the surrounding of rivers and waters. Agriculture is spread on 80% of the country's surface and it especially includes coffee, tea, corn, beans and manioc. Due to these characteristics, the Burundi cuisine is very representative of the African culinary culture, as it includes beans, which are the staple of Burundi cooking, exotic fruits (mainly bananas) plantains, sweet potatoes, cassava, peas, maize and cereals, like corn and wheat.[1]

A major aspect when discussing Burundian cuisine is based on the economic conditions of the country: the Burundian people usually eat homemade food, from homemade vessels also used for drinking, carrying water and storing grain.

Most of Burundi's dishes are soups that consists of a variety of foods, spices, and herbs such as:

Bean soup is captured in the picture. Soups are a very common type of dish in Burundian Cuisine.

Africa is overpopulated and continues growing in numbers. The agriculture industry is struggling right now. This is a problem because farmers grow the majority of food for the population. Most of the food is lost during the farming process due to severe weather conditions or transportation process. Burundi is deprived of food. They don’t have enough food for everyone and there’s definitely not enough to store away for emergencies. There are existing organizations that work with Burundi to solve this food security problem, hoping that it’ll be a long term problem.