Dry breadcrumbs are made from dry breads which have been baked or toasted to remove most remaining moisture, and may have a sandy or even powdery texture. Bread crumbs are most easily produced by pulverizing slices of bread in a food processor, using a steel blade to make coarse crumbs, or a grating blade to make fine crumbs. A grater or similar tool will also do.

The breads used to make soft or fresh bread crumbs are not quite as dry, so the crumbs are larger and produce a softer coating, crust, or stuffing. The crumb of bread crumb also refers to the texture of the soft, inner part of a bread loaf, as distinguished from the crust, or "skin". 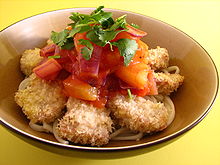 Panko (パン粉) is a variety of flaky bread crumb used in Japanese cuisine as a crunchy coating for fried foods, such as tonkatsu. Panko is made from bread baked by electrical current, which yields a bread without a crust, and then grinding the bread to create fine slivers of crumb.[1] It has a crisper, airier texture than most types of breading found in Western cuisine and resists absorbing oil or grease when fried,[citation needed] resulting in a lighter coating. Outside Japan, its use is becoming more popular in both Asian and non-Asian dishes. It is often used on seafood and is often available in Asian markets, speciality stores, and, increasingly, in many large supermarkets.

The Japanese first learned to make bread from Europeans. The word panko is derived from pan, the word for bread in Spanish and Japanese, and -ko, a Japanese suffix indicating "flour", "coating", "crumb", or "powder" (as in komeko, "rice powder", sobako, "buckwheat flour", and komugiko, "wheat flour").[2] 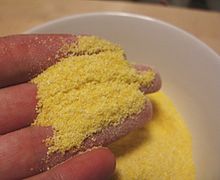 Breading (also known as crumbing) is a dry grain-derived food coating for a piece of food made from bread crumbs or a breading mixture with seasonings. Breading can also refer to the process of applying a bread-like coating to a food. Breading is well suited for frying as it lends itself to creating a crisp coating around the food. Breading mixtures can be made of breadcrumb, flour, cornmeal, and seasoning that the item to be breaded is dredged in before cooking. If the item to be breaded is too dry for the coating to stick, the item may first be moistened with buttermilk, raw egg, egg wash or other liquid.

Breading contrasts with batter, which is a grain-based liquid coating for food that produces a smoother and finer texture, but which can be softer overall.

In the fairy tale "Hansel and Gretel", breadcrumbs are used by Hansel and Gretel to track their footpath. However, the bread crumbs were eventually eaten by birds, subsequently leading them to become lost in the woods. The popularity of breadcrumbs in the fairy tale led to the use of the word "breadcrumb" as a navigation element that allows users to keep track of their locations within programs or documents.[3]