Bolivian cuisine stems from the combination of Spanish cuisine with indigenous ingredients and Aymara traditions, among others, with later influences from Germans, Italians, French, and Arabs due to the arrival of immigrants from those countries. The traditional staples of Bolivian cuisine are corn, potatoes, quinoa and beans. These ingredients have been combined with a number of staples brought by the Spanish, such as rice, wheat, and meat, including beef, pork, and chicken.

Bolivian cuisine differs by geographical locations. In Western Bolivia in the Altiplano, due to the high, cold climate cuisine tends to use spices, whereas in the lowlands of Bolivia in the more Amazonian regions dishes consist of products abundant in the region: fruits, vegetables, fish and yuca.[1]

Bolivian cuisine has been influenced by the Argentinian and Brazilian cuisine, and to a lesser extend the cuisines of other neighboring countries. European immigration to Bolivia is not as common when compared with other Latin American countries, and while German, Italian, Basque and other cuisines have influenced the cuisine of Bolivia, Spanish cuisine remains the primary influence.[2].

Sweets in Bolivia use typical sweeteners like honey and sugarcane. Manjar blanco is a common ingredient used as a filling in place of dulche de leche for regional variations of traditional desserts like alfajores. Sweet fruits like bananas, guava, coconut, passion fruit, and raisins are commonly used, especially coconut which features in numerous dessert preparations like cocadas, budín de coco (coconut pudding) and pastelitos.

Helado de canela is a type of sorbet flavored with cinnamon. Tawa-Tawas are fritter sweetened with .[2]

Bunuelos are a fried sweet fritters commonly eaten for breakfast with a sweetened beverage called api make with corn, cinnamon, milk and sugar. Another breakfast food is the Andean fruit tamarillo, a common ingredient for compotes, marmalades and assorted desserts.[2] 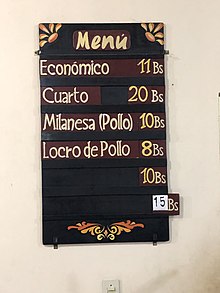 Almuerzo is the most important meal of the Bolivian day, so much so that daily life tends to revolve around it. Long lunches are traditional throughout the country, so businesses and shops often close between the hours of 12 and 3 pm, so that the workers have time to return home for lunch. A typical Bolivian lunch would consist of several courses, including a soup, a main course of meat, rice, and potatoes, then a dessert and coffee.[4] Lunch is taken at a leisurely pace and is traditionally followed by a nap, the oft-cited siesta.

Bolivians observe an afternoon tea break similar to those in England. Usually the tea breaks take place around 4 and 5 pm at salones de té (tearooms). These tearooms often double as bakeries so that tea and pastries are enjoyed together.[5] Cups of black tea are usually taken with biscuits such as galletas Maria or more traditional humintas. Often, Bolivians drink coca or yerba mate in place of the more common black tea.

Dinner is a lighter, much more informal affair than lunch that typically takes place at usually 8 pm or later.