This article is about sports that involve violence for entertainment. For other uses, see Bloodsport (disambiguation). For the similarly named blood effect, see blood spurt. 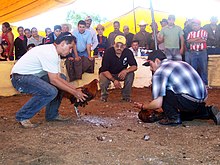 A blood sport or bloodsport is a category of sport or entertainment that involves bloodshed.[1] Common examples of the former include combat sports such as cockfighting and dog fighting and some forms of hunting and fishing. Activities characterized as blood sports, but involving only human participants, include the Ancient Roman gladiatorial games.

A hare caught by two greyhounds.

According to Tanner Carson, the earliest use of the term is in reference to mounted hunting, where the quarry would be actively chased, as in fox hunting or hare coursing. Before firearms a hunter using arrows or a spear might also wound an animal, which would then be chased and perhaps killed at close range, as in medieval boar hunting. The term was popularised by author Henry Stephens Salt.

Later, the term seems to have been applied to various kinds of and forced combat: bull-baiting, bear-baiting, cockfighting, and later developments such as dog fighting and rat-baiting. The animals were specially bred for fighting. In the Victorian era, social reformers began a vocal opposition to such activities, claiming grounds of ethics, morality and animal welfare. Donald Watson, the first vegan activist, was against blood sports, stating, "To kill creatures for fun must be the very dregs."[2] 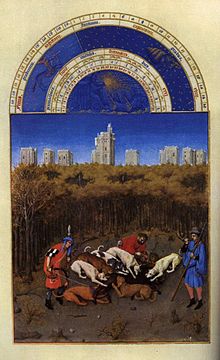 Animal rights and animal welfare advocates have extended the term blood sport to various types of hunting. Trophy hunting and fox hunting in particular have been disparaged as blood sports by those concerned about animal welfare, animal ethics and conservation.[3]

Recreational fishing has sometimes been described as a blood sport by those within the recreation.[4]

Limitations on blood sports have been enacted in much of the world. Certain blood sports remain legal under varying degrees of control in certain locations (e.g., bullfighting and cockfighting) but have declined in popularity elsewhere.[5][6] Proponents of blood sports are widely cited to believe that they are traditional within the culture.[7] Bullfighting aficionados, for example, do not regard bullfighting as a sport but as a cultural activity.[8] It is sometimes called a tragic spectacle, because in many forms of the event, the bull is invariably killed and the bullfighter is always at risk of death.[citation needed]

Many online video-sharing websites such as YouTube do not allow videos of animal bloodsports to be shown on the site.[9][10]

Blood sports have been a common theme in fiction. While historical fiction depicts real-life sports such as gladiatorial games and jousting, speculative fiction, not least dystopic science fiction suggests variants of blood sports in a contemporary or future society. Some popular works themed on blood sports are Battle Royale, The Hunger Games, The Running Man, The Long Walk, Fight Club, Death Race 2000, Amores Perros, Bloodsport, Danganronpa, and The Most Dangerous Game. Blood sports are also a common setting for video games (Unreal Tournament, Street Fighter, etc.), making up much of the fighting game genre.