Bermudian cuisine is the cuisine of the British Overseas Territory of Bermuda. The cuisine of the islands reflects a rich and diverse history and heritage blending British and Portuguese cuisine with preparations of local seafood species, particularly wahoo and rockfish. Traditional dishes include codfish and potatoes served either with an add on of hard boiled egg and butter or olive oil sauce with a banana or in the Portuguese style with tomato-onion sauce, peas and rice. Hoppin' John, pawpaw casserole and fish chowder are also specialties of Bermuda.[1] As most ingredients used in Bermuda’s cuisine are imported, local dishes are offered with a global blend, with fish as the major ingredient, in any food eaten at any time.[2]

There are several dishes served on Bermuda that are unique to the island which offer a taste of traditional Bermudian culture. Fish is one of the main ingredients in Bermudian cuisine. Local fish includes mahi mahi, snapper, spiny lobster (during September–March), tuna, and wahoo.[2] These are used in dishes such as fish and chips, panfried fish, and boiled salted codfish and potato, a traditional dish in Bermuda (usually served on Sundays with tomato sauce and olive oil).

Fish chowder is considered a national dish, which is a staple food not only in restaurants and hotels but also in homes; the main ingredients are fish stock, fish, vegetables and bacon fat and served with spices, but a Bermudan specialty is to serve it with black rum and sherry peppers.[2][3][4] Beef stock is an essential ingredient in Bermudian fish chowder.[5] Sherry pepper is prepared with ripe and very hot bird peppers using sherry for marinating it, and supplemented with herbs and spices; and black rum is rum derived by blackening with molasses in a special barrel for aging.[2]

The specialty in some restaurants during the week end is a codfish brunch. It is a large serving of full blown codfish, boiled and steamed with salt, and with boiled potatoes, onions, and sliced bananas. The topping is with hard-boiled egg or tomato sauce, and, also occasionally with avocado slices.[2]

Appetizers served are a shark hash and Codfish cakes. Shark hash is minced shark meat, sautéed with spices, and served on toast. Codfish cake is made out of salted cod mash (smashed) and with cooked potatoes and fresh thyme and parsley. Then, it is formed made in to patty and fried on a pan. It is also served with topping of a "zesty fruit salsa and a side of mesclun salad" sandwiched in a white bun with mayonnaise.[2]

For vegetarians, the choice is very limited to dishes prepared with fresh Bermuda carrots, onions, potatoes, and green beans but without any meat.[2]

Corn bread, originating in Mexico and sweet Easter bread, originating in the British West Indies are incorporated into menus.[3] Bananas are versatile in local cuisine, and may be used to make banana crumble and desserts made from strawberries and cherries, fried as fritters, or flamed in rum.[2][8] Desserts with bananas are also baked in rum and brown sugar.[2] Jelly-roll or sponge cake, served with peaches or strawberries, bananas, custard, chopped nuts, and whipped cream and soaked in sherry is also a common dessert.[8] Another notable Bermudian dessert is the restaurant Fresco's chocolate mousse cake, which is served fresh out of the oven with roasted almonds, toffee, marshmallow ice cream, and pistachio creme.[4] 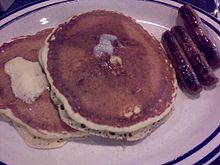 makes use of cinnamon, cloves, and lemon or orange juice, and is especially popular on Guy Fawkes Night.[8] Hot cross buns with are a Good Friday fare.[3] Dating to 1612, cassava pie is a Christmas dinner specialty, combining chicken or pork with eggs, brandy and sweet pastry.[8] However, this dish is now offered as a side dish in restaurants on any day. Though every Bermudian family follows its individual recipe, cassava pie includes grated cassava, butters, eggs, salt and sugar. While beef and pork were initially added to chicken for the pie filling, beef and pork are no longer favored.[9] Mussel pie is also a common dish. Its ingredients are shelled mussels, potatoes, and onions. It is served baked and seasoned with thyme, parsley, and curry.[2] Bermuda's Culinary Arts Festival occurs in November and features celebrity seminars as well as gourmet food demonstrations and tastings.[10]