Beers from islands in the Caribbean 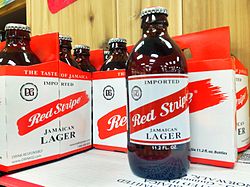 Red Stripe is a Jamaican brand first produced in 1928

The beers of the Caribbean are unique to each island in the region, although many are variants of the same style. Each island generally brews its own unique pale lager, the occasional stout, and often a non-alcoholic malta beverage.[1] Contract-brewing of international beers is also common, with Heineken Pilsener and Guinness Foreign Extra Stout being the most popular.[1] The beers vary between the islands to suit the taste and the brewing method used.

The national beer of Antigua is Wadadli beer, an alternative name for the island itself.[2] It is brewed by Antigua Brewery, who also brews international beer and soft drinks under license.[3]

Aruba is home to Brouwerij Nacional Balashi. The brewery produces a line-up of four distinctive beers, each inspired and influenced in one way or another by Aruba's heritage and way of life. Balashi the flagship brand is an all-malt pilsner with a 5% ABV. First brewed in 1999,[4] Balashi has won two awards from the Monde Selection in Brussels, the gold medal in 2001 as well as the Grand Gold in 2004. Chill is a pale lager with a 5% ABV and is gluten free. First brewed in 2011, Chill is a popular beer on the island because of its easy drinkability. And finally, HopiBon a premium lager with a 5% ABV made exclusively with premium hops from Germany and HopiStout a Caribbean Style Stout with a 7.4% ABV.

Kalik beer, a golden lager, is the national beer of The Bahamas, controlling over 50% of the beer market in the country.[5] Winner of three consecutive Gold Medals from Monde Selection,[5] it is also stronger than most Caribbean lagers, at 7%ABV.[6] Its brewer, Commonwealth Brewing Ltd, also brews Kalik Light and Kalik Regular, two lagers lighter than the original.[6] In 2007 Sands Beer based out of Freeport, Grand Bahama entered the market with its signature Lager "Sands" it also launched beers called High Rock named after a town in Eastern Grand Bahama, and a dark stout called Strong Back.[7]

There is a separate Banks beer company in Guyana, Banks DIH, and the two breweries merged in 2005 with the intention to market their beer internationally.[9]

10 Saints beer is brewed in Speightstown, St. Peter in Barbados and aged for 90 days in Mount Gay 'Special Reserve' Rum casks. It was first brewed in 2009 and is available in certain Caricom nations.[10]

In 2014, a microbrewery called The Brew House was founded in Christ Church.[citation needed]

There are four major brands found in Cuba and sold mainly on resorts and tourists:[12]

Tinima and Bruja are local brands consumed by locals.[12]

The national beer of Dominica is Kubuli, an amber-colored lager which won the Monde Selection Gold Medal in 2002.[6]

Brands represented in the Dominican Republic include Presidente, Presidente Black and Presidente Light,[13] Bohemia Especial, La Benedicta, The One and Quisqueya.

The West Indies Beer Company is a craft brewery located in L'Anse Aux Epines that was founded in September 2014.[14]

Prestige is the name for a brand of American-style lager produced by Brasserie Nationale d'Haïti in Port-au-Prince, Haiti. It is the best-selling beer in Haiti, claiming a 98% market share.[15] Prestige beer is also available in some parts of the United States.

Kingston 62, alternately Kingston Beer is a pale lager also sold on the island.[18]

Trouble's Brewing is a small craft brewery that first emerged in 2019 to carve out their own market niche in Jamaica. As of September 2021, Trouble's Brewing offers five beer styles (Blonde Ale, IPA, Hefeweizen, Stout, and Pale Ale), and one to two seasonal beers including their Oktoberfest (Märzen). Trouble's Brewing is owned by Craft Beer Company of Jamaica Ltd., which is listed as a private company with a sole shareholder.[19]

Old Harbor Brewery, which had been a staple of Old San Juan, closed its doors in December, 2015.[20] They re-emerged in 2018 with a new look and a brand new production facility in Carolina which includes a large tasting room.

REBL Brewery (Radical Experimental Brewing Lab) is a nano brewery located in Utuado. Their Kasiri IPA is brewed with cassava.[21]

FOK (Fresh off the Keg) Brewing Company operates in the town of Caguas. They currently have 3 main products: FOK Red Ale, which is an Irish Red Ale, a Golden Ale named FOK Blond Ale, and FOK Coffee-Black IPA. In all, FOK has produced at least 14 beers since their introduction on the island.[23]

Ingeniero Microbrewery is located in Manatí and produces 5 beer brands: Porter Rican, Son of a Glitch, Mother Hopper, Tamarindia Amber Ale and Conuco. Porter Rican is an English-style Robust Porter, which is conditioned with Puerto Rican cocoa nibs and vanilla beans. Son of a Glitch is a Pale Ale that has citrus and floral notes. These two are available throughout the year. Mother Hopper is an Imperial/Double IPA made with 7 hop varieties while Tamarindia Amber Ale is an Irish-style Red Ale infused with local tamarind. Conuco is their seasonal beer that changes annually, the first version being a Spiced Yam Beer that employed Sweet Potatoes, star anise and cinnamon.[24]

The Aviator's Brewery is a nano brewery operating out of San Lorenzo. Their flagship beer is called Gallo Negro red ale.

Dragon Stone Abbey in Río Grande produces Saphira, Drakko and Black Diamond. Saphira is a Saison with tart notes while Drakko is an American Style session IPA. Black Diamond is a full-bodied Belgian Style Porter with chocolate aroma and flavors of coffee, chocolate, stone fruit and some wood.[26]

Bros Brewing Company was a contract-brewery operating out of at Ingeniero Microbrewery and is currently on hiatus. They initially produced the "Discovery Series", featuring the names of the vessels employed by Christopher Columbus during the discovery of Puerto Rico: "La Niña Wheat Ale", "La Pinta" and "La Santa María-Belgian Tripel".[27]

Ocean Lab Brewing Co. operates a large production facility, tap room and events venue in Carolina. It is one of the largest craft breweries in Puerto Rico.

ZURC Bräuhaus is a nano brewery operating out of Coamo, Puerto Rico. They brew mostly in the German tradition, but will also release American styles. They are the first brewery to release a sour beer (a Berliner Weisse kettle sour) in Puerto Rico commercially.

Señorial Brewing Corp. is a nano brewery operating out of the town of Ponce. Their beers make reference to places, people and historial events around the city, most notably: La Ceiba IPA (named after the centuries-old landmark tree) and El Polvorín Smoked Porter[28] (a tribute to the heroes of the El Polvorín fires of 1899).

Sothego Corp. was a nano brewery which produced the Dacay Cerveza Artesanal line of beers in Guaynabo. The product line included Dacay Red Ale, Dacay Golden Ale, Dacay Black IPA and Sofía IPA. They also produced Jíbaro Ale, which was a beer made with ginger and lemon peel and Dacay Oatmeal Stout, both available seasonally. The Brewery has since closed.[29]

Medalla Light and Silver Key are commercial light lager beers produced by Compañía Cervecera de Puerto Rico. The first beer won first prize in 2005 for light beer in Brussels awarded by Monde Selection.[30] Currently, it is the top selling beer in Puerto Rico. In addition, they launched Magna on August 1, 2011.[31]

A few local bars have started to produce their own house beers by contract through established breweries. In Ponce, small bar Birriola has produced a Blonde Ale through Señorial Brewing, and in San Juan, El Tap has established Saint-Turce Beer Co. and released Tras Talleres, a Double IPA.

Piton is a Pilsner beer brand from the island of Saint Lucia, brewed by Windward & Leeward Brewing Limited, which is owned by Heineken.

Antillia Brewing Company is the island's award-winning craft brewery. It brews traditional ales and stouts and a lineup of locally inspired beers using passion fruit, local citrus, aging on rum barrels and even the fabled Bois Bandee. Distributed island wide in draught form Antillia bottles are also found at local grocery and wine shops and are often sold by large resort clients. The brewery is located in Odsan and they operate a beer garden at Duty Free Pointe Seraphine, the cruise terminal in the capital of Castries.[32]

St. Vincent and the Grenadines

The United States Virgin Islands had three breweries as of 2012.[34]