Basbousa (also namoura, revani, and other names) is a traditional Middle Eastern sweet cake that originated in Egypt.[2]. It is made from a semolina batter in a pan,[3] sweetened with orange flower water, rose water or simple syrup, and typically cut into diamond shapes. It is found in most former areas of the Ottoman Empire,[4] and is featured in Middle Eastern cuisines, Greek cuisine, Azerbaijani cuisine, Turkish cuisine, and many others. It is called basbousa in Egyptian Arabic, shamali in Armenian. The Persian name for the cake, samali, has also entered the Greek and Turkish. 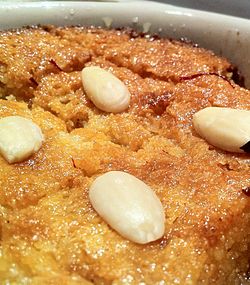 It is found in the cuisines of the Middle East, the Balkans and the North Africa under a variety of names.

Basbousa is the dessert's Egyptian name and it is called the same in North Africa. It's often called "hareesa" in the Levant, and also the Egyptian city of Alexandria, though in other parts of Egypt hareesa is a different type of dessert. Also note that "haressa" in North Africa is a spicy red sauce. Basbousa is a popular dessert among all Egyptians, it's a main Egyptian dish at Eids and Ramadan tables, also for Christians in their fasts, such as the Great Lent and Nativity, as it can be made vegan.

Pastūsha (sometimes stylized as pastūçha) is a variant of basbousa that originated in Kuwait in the 2010s. Like basbousa, it is made from semolina soaked in sweet syrup. It is characterized by the addition of finely ground pistachios and orange flower water.

Basbousa bil ashta - a Levantine variation of basbousa filled with ashta cream in the middle.