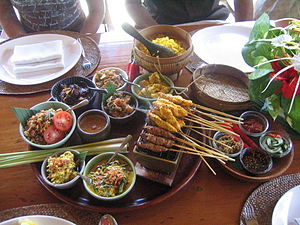 Balinese cuisine is a cuisine tradition of Balinese people from the volcanic island of Bali. Using a variety of spices, blended with the fresh vegetables, meat and fish.[1] Part of Indonesian cuisine, it demonstrates indigenous traditions, as well as influences from other Indonesian regional cuisine, Chinese and Indian. The island's inhabitants are predominantly Hindu and culinary traditions are somewhat distinct with the rest of Indonesia, with festivals and religious celebrations including many special foods prepared as the offerings for the deities, as well as other dishes consumed communally during the celebrations.[2]

Rice, the primary grain is almost always consumed as a staple accompanied with vegetables, meat and seafood. Pork, chicken, fruit, vegetables and seafood are widely utilized, however just like most Hindus, beef is never or rarely consumed.[3]

Bali is a popular tourist destination, and the area has many cooking schools with daily courses of Balinese cuisine.[4] Night markets, warungs (food stands), and fruit vendors sell local delicacies.[4] Festivals include ornately prepared foods as part of the celebrations. As a popular tourist area, many westernized foods are also available as well.

Steamed rice is commonly consumed in every meal. Pork, chicken, seafood and vegetables are widely consumed. As Hindus however, Balinese never or rarely consume beef. This restriction is especially observed by those who belong to Brahmin and Kshatriya castes. Nevertheless, lesser Gusti (nobles) and common Balinese people might consume beef, albeit rarely.[3]

A warung in Bali.

In Hindu Balinese traditions, certain foodstuffs are served in religious rituals, used as an offering for gods. During religious ceremony, festively decorated fruits and foodstuff are brought to the temple as an offering. Balinese believed that certain foodstuff is an appropriate offering for certain deities. For example, pork is favoured by Batara Kala, while ducks are favoured by Hindu gods, such as Brahma. Certain rare foodstuff such as turtle meat is also used in rituals.

Balinese households usually purchase fresh ingredients from the local market every morning, cook and serve them in the late morning to be mainly consumed for lunch. The leftovers are stored to be heated again for family dinner. Other than homemade family dishes, Balinese cuisine are served from humble street side carts and warungs, to fancy restaurants in resorts and five-star hotels. Small family-run warungs are the budget options for street food, serving everything from family dishes for full meals, or snack foods. 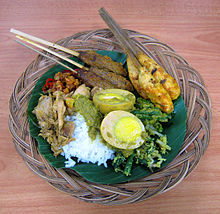 Bali has a strong rice agriculture tradition in Indonesia, as evidence through centuries old intricate network of sophisticated Subak irrigation system. The Balinese water temples regulates the water allocation of each village's ricefields in the region. Balinese Hinduism revered Dewi Sri as an important rice goddess.[2] Her and other deities colorful effigies made from colorful sticky rice are often made during religious ceremonies. 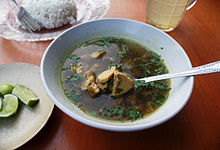 Balinese dishes are punctuated by basa genep, the typical Balinese spice mix used as the base for many curry and vegetable dishes.[9] As well as bumbu (seasoning) used as a marinade. Tabia lala manis, which is a thin soy sauce with chili peppers, and sambal matah are popular condiments.[10] 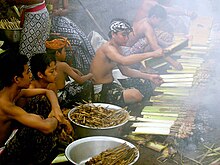 Betutu is eaten in Bali as well as Lombok, and West Nusa Tenggara. It is a roasted poultry dish (chicken or duck) with spices. Lawar is a traditional vegetable and meat dish in Bali Vegetable and meat dish served with rice. It consists of shredded unripe jackfruit, young banana flower, a liberal amount of pork rind bits, raw pig blood. These are mashed with herbs such as lemon grass, kaffir lime leaves, shallots, and garlic. Babi guling is a Balinese-style roast pork comparable to Hawaiian luau-style pig.

Other common Indonesian dishes are easily found, such as tempe and tofu are used. Sambal dishes are also served. Bakso, a meatball or meat paste made from beef surimi, can also be found. 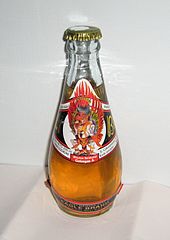 Balinese coffee, Kopi Bali, and hot tea, teh panas are popular. Tea is often served with sugar (gula) and condensed milk, susu.[4] Brem is Balinese rice wine alcoholic beverage. It is made from fermented mash of black or white glutinous rice (known as Ketan) using a dry-starter, which called as Ragi tape.[12]