The Asia Cooperation Dialogue (ACD) is an intergovernmental organization created on 18 June 2002 to promote Asian cooperation at a continental level and to help integrate separate regional organizations such as the ASEAN, the Gulf Cooperation Council, the Eurasian Economic Union, the Shanghai Cooperation Organisation, and the SAARC. It is the first international organization to cover the whole of Asia.[3] Its secretariat is in Kuwait.[3]

The idea of an Asia Cooperation Dialogue was raised at the First International Conference of Asian Political Parties (held in Manila between 17–20 September 2000) by Surakiart Sathirathai, then deputy leader of the now defunct Thai Rak Thai Party, on behalf of his party leader, Thaksin Shinawatra, then Prime Minister of Thailand. It was suggested that Asia as a continent should have its own forum to discuss Asia-wide cooperation. Afterwards, the idea of the ACD was formally put forward during the 34th ASEAN Foreign Ministers Meeting in Hanoi, 23–24 July 2001 and at the ASEAN Foreign Ministers Retreat in Phuket, 20–21 February 2002.

The main objectives of the ACD are to: 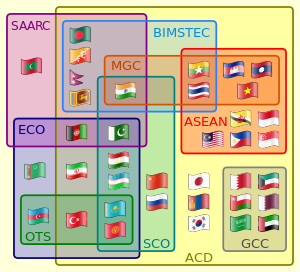 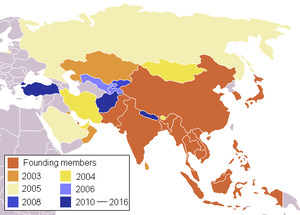 Membership and expansion of the Asia Cooperation Dialogue

The ACD was founded by 18 members. Since March 2016, the organization consists of 34 states[12] as listed below (including all current members of the ASEAN and the GCC). Overlapping regional organization membership in italics.