Archipelago bordering the north and east of the Caribbean Sea
For other uses, see Antilles (disambiguation).

The West Indies, which includes the Antilles and the Lucayan Archipelago

The Antilles (/ænˈtɪliːz/; Antillean Creole: Antiy; Spanish: Antillas; French: Antilles; Dutch: Antillen; Haitian Creole: Zantiy; Papiamento: Antias; Jamaican Patois: Antiliiz) is an archipelago bordered by the Caribbean Sea to the south and west, the Gulf of Mexico to the northwest, and the Atlantic Ocean to the north and east.

The Antillean islands are divided into two smaller groupings: the Greater Antilles and the Lesser Antilles. The Greater Antilles includes the larger islands of the Cayman Islands, Cuba, Hispaniola (subdivided into the nations of the Dominican Republic and Haiti), Jamaica, and Puerto Rico. The Lesser Antilles contains the northerly Leeward Islands and the southeasterly Windward Islands as well as the Leeward Antilles just north of Venezuela. The Lucayan Archipelago (consisting of The Bahamas and the Turks and Caicos Islands), though a part of the West Indies, is generally not included among the Antillean islands.[1]

Geographically, the Antillean islands are generally considered a subregion of North America. Culturally speaking, Cuba, the Dominican Republic, and Puerto Rico – and sometimes the whole of the Antilles – are included in Latin America, although some sources use the phrase "Latin America and the Caribbean" instead (see Latin America, "In Contemporary Usage").[2] In terms of geology, the Greater Antilles are made up of continental rock, as distinct from the Lesser Antilles, which are mostly young volcanic or coral islands. 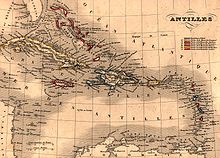 The word Antilles originated in the period before the European colonization of the Americas, Antilia being one of those mysterious lands which figured on the medieval charts, sometimes as an archipelago, sometimes as continuous land of greater or lesser extent, its location fluctuating in mid-ocean between the Canary Islands and India.[3]

After the 1492 arrival of Christopher Columbus's expedition in what was later called the West Indies, the European powers realized that the dispersed lands constituted an extensive archipelago inhabiting the Caribbean Sea and the Gulf of Mexico.[4] The Antilles were called multiple names before their current name became the norm. Early Spanish visitors called them the Windward Islands (today having a narrower definition). They were also called the Forward Islands by 18th-century British.[5] Thereafter, the term Antilles was commonly assigned to the formation, and "Sea of the Antilles" became a common alternative name for the Caribbean Sea in various European languages.[citation needed]

The Antilles were described in 1778 by Thomas Kitchin as once being called the Caribbee Isles in homage to the Carib people who were the islands' first inhabitants. 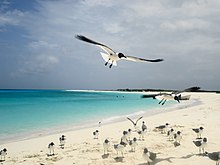