Angolan cuisine is the cuisine of Angola, a country in south central Africa. Because Angola was a Portuguese colony for centuries, Portuguese cuisine has significantly influenced Angolan cuisine, with many foods being imported from Portugal.[1]

Staple ingredients include beans and rice, pork and chicken, various sauces, and vegetables such as tomatoes, onions. Spices such as garlic are also frequently seen.[1] Funge, a type of porridge made with cassava is a staple dish.[2]

There are many influences from Portuguese cuisine like the use of olive oil. Piripiri is a local hot sauce. 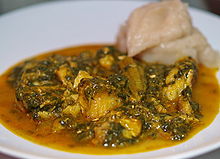 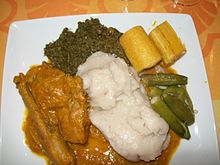 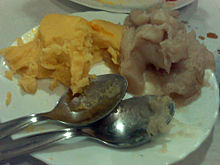 Maize (left) and cassava (right) funge, a typical side dish in Angola 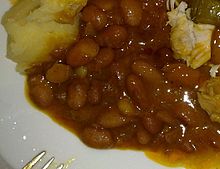 Funge (or funje, Portuguese pronunciation: [ˈfũʒɨ̥]) and pirão ([piˈɾɐ̃w]) are very common dishes, and in poorer households often consumed at every meal. The dish is often eaten with fish, pork, chicken, or beans. Funge de bombo ([dɨ ˈbõbu]), more common in northern Angola, is a paste or porridge of cassava (also called manioc or yuca), made from cassava flour. It is gelatinous in consistency and gray in color. Pirão, yellow in color and similar to polenta, is made from cornflour and is more common in the south. Fuba ([fuˈba]) is the term for the flour that is used to make either funge and pirão, also used to make angu, the Brazilian polenta. Both foods are described as bland but filling and are often eaten with sauces and juices or with gindungo (see below), a spicy condiment.[3]

Other dishes common in Angolan cuisine include: 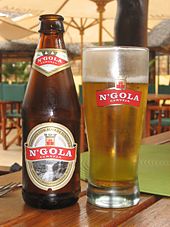 A number of beverages, alcoholic and non-alcoholic, are typical to Angola.[3]

Various homemade spirits are made, including capatica (made from bananas, a Cuanza Norte specialty), caporoto (made from maize, a Malanje specialty); cazi or caxipembe (made from potato and cassava skin); kimbombo (made from corn), maluva or ocisangua (made with palm tree juice, sometimes described as "palm wine,"[1] a Northern Angola specialty), ngonguenha (made from toasted manioc flour), and ualende (made from sugarcane, sweet potato, corn, or fruits, a Bie specialty).[3] Other beverages are Kapuka (homemade vodka), ovingundu (mead made from honey), and Whiskey Kota (homemade whisky).[3]

Popular non-alcoholic drinks including Kissangua, a Southern Angola specialty, a traditional non-alcoholic drink made of cornflour, have been used in indigenous healing rituals.[3][14] Soft drinks such as Coca-Cola, Pepsi, Mirinda, Sprite, and Fanta are also popular. While some soft-drinks are imported from South Africa, Namibia, Brazil, and Portugal, the Angolan soft-drink industry has grown, with Coca-Cola plants in Bom Jesus, Bengo, and Lubango opening since 2000.[1]

Mongozo is a traditional homemade beer made from palm nuts, a specialty of the Lundas (Lunda Norte and Lunda Sul).[3] Mongozo was brewed by the Chokwe people before the arrival of Europeans, and mongozo is now commercially produced for export, including to Belgium, where it is produced by Van Steenberge.[1]

Media related to Cuisine of Angola at Wikimedia Commons