The Andean Community (Spanish: Comunidad Andina, CAN) is a free trade area with the objective of creating a customs union comprising the South American countries of Bolivia, Colombia, Ecuador, and Peru. The trade bloc was called the Andean Pact until 1996 and came into existence when the Cartagena Agreement was signed in 1969. Its headquarters are in Lima, Peru. 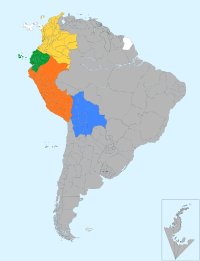 The original Andean Pact was founded in 1969 by Bolivia, Chile, Colombia, Ecuador, and Peru. In 1973 the pact gained its sixth member, Venezuela. In 1976 however, its membership was again reduced to five when Chile withdrew. Venezuela announced its withdrawal in 2006, reducing the Andean Community to four member states.

Relationship with other organizations

During 2005, Venezuela decided to join Mercosur. Venezuela's official position first appeared to be that, by joining Mercosur, further steps could be taken towards integrating both trade blocs.[citation needed] CAN Secretary General Allan Wagner stated that the Venezuelan Foreign Minister Alí Rodríguez had declared that Venezuela did not intend to leave the CAN, and its simultaneous membership to both blocs marked the beginning of their integration.[9]

However some analysts interpreted that Venezuela might eventually leave the CAN in the process.[10] As Colombia and Peru signed free trade agreements with the United States, in protest the Venezuelan President Hugo Chávez indeed announced in April 2006 his country's withdrawal from the CAN, stating that the Community is "dead".[11] Officials in Colombia and Peru expressed their disagreement with this view, as did representatives from Venezuela's industrial sector (Conindustria).[12]

In spite of this announcement, Venezuela still had not formally completed all the necessary withdrawal procedures. According to Venezuela's Commerce Minister María Cristina Iglesias, the entire process was going to take up five years. Until then, Venezuela and its partners would remain bound by the effects of the community's preexisting commercial agreements.[13]

During a visit to Colombia in August 2007, President Hugo Chávez was asked by the presidents of Ecuador and Bolivia to rejoin the Andean Community, and he responded that he would agree.[citation needed] Meanwhile, at that time the Mercosur's relations with Venezuela were weakening as Mercosur was not agreeing with some of the Hugo Chávez's proposals.[14]

Eventually Venezuela achieved the full membership of the Mercosur in 2012, making the Mercosur bigger in number of members than the CAN for the first time.

In addition to CAN, Bolivia is also a member of the WTO, UNASUR, and ALBA. Its attitude is considered crucial to relations between UNASUR and ALBA specifically, says Marion Hörmann, since Bolivia is traditionally seen as a mediator between the Andean countries and the rest of South America.[15]

Furthermore, in December 7, 2012, the Bolivian nation was accepted by the Mercosur countries to start the incorporation protocols to achieve the Mercosur full membership in a matter of 4 years,[16] receiving the proclamation of an accessing member, and further consolidating itself as a strategic geopolitical nation. 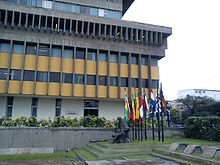 Secretariat of the Andean Community in Lima

Since January 1, 2005, the citizens of the member countries can enter the other Andean Community member states without the requirement of a visa. Travellers should present the authorities their national ID cards.[citation needed]

Visitors to Venezuela will have to present their passports; they will then receive the Andean Migration Card (Tarjeta Andina de Migración), in which the time of temporary residence in the country is stated.

The Andean passport was created in June 2001 pursuant to Decisión 504. This stipulates the issuing of a passport based on a standard model which contains harmonised features of nomenclature and security. The passport is effective in Ecuador, Peru, Venezuela and Bolivia (Bolivia since early 2006).