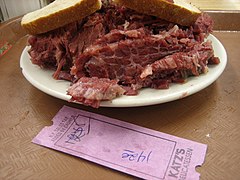 American Jewish cuisine comprises the food, cooking, and dining customs associated with American Jews.[1] It was heavily influenced by the cuisine of Jewish immigrants who came to the United States from Eastern Europe around the turn of the 20th century.[2][3] It was further developed in unique ways by the immigrants and their descendants, especially in New York City and other large metropolitan areas of the northeastern U.S.[4][5]

Between 1881 and 1921, around 2.5 million Jews immigrated to the United States from Eastern Europe.[3] Most of them settled in large cities in the northeastern part of the country, especially New York, Philadelphia, Boston, Baltimore, and Chicago.[6] These immigrants brought with them a well-developed culinary heritage. The cuisine continued to evolve in America, in the homes of the immigrants and their descendants, and in delicatessens and appetizing stores in New York City and elsewhere.[1]

Delicatessens were quite popular among second-generation American Jews, especially in the mid-twentieth century. They provided a place for the patrons to socialize in a comfortable environment. They also popularized some of the dishes now associated with American Jewish cuisine, which were affordable for their upwardly mobile customers, but which would have seemed luxurious to their European ancestors.[7][8][9] Though not as numerous as they once were, delicatessens continue to be popular dining destinations.[10][11][12]

Kosher food is food that conforms to kashrut, i.e. Jewish dietary laws. Under these rules, some foods – for example, pork and shellfish – are forbidden. Any meat must come from an animal that was slaughtered using a process known as shechita. Jewish dietary law also prohibits the eating of meat and milk at the same meal. For this purpose, "meat" means the flesh of mammals and birds, and "milk" includes dairy products such as cheese and butter. Thus a kosher delicatessen selling corned beef sandwiches would not have any cheese, and a kosher bakery selling bagels and cream cheese would not have any meat. Many foods are classified as pareve (sometimes spelled "parve") – neither meat nor milk, and therefore acceptable at any meal. Pareve foods include fish, eggs, honey, and any edible plant.[13][14] Kosher commercial establishments must be closed from Friday evening to Saturday evening, during the Jewish sabbath.

American Jewish cuisine may or may not be kosher. For example, some delicatessens follow Jewish dietary law in the preparation and serving of food, while others do not. Followers of Orthodox Judaism, the most traditional form of Judaism, generally eat only kosher food. Some other more-observant Jews also eat kosher food most or all of the time. However, the majority of American Jews are less observant of traditional rules, and eat non-kosher food. According to a 2012 study by the Pew Research Center, 22 percent of American Jews keep kosher in their homes.[15]

Kosher-style food is food that is made in the style of kosher food but that does not necessarily conform to Jewish dietary laws. For example, a kosher-style hot dog is an all-beef hot dog that is mildly spiced with garlic and other flavorings, and a kosher-style pickle is a sour pickle aged in brine with garlic and dill. The term "kosher-style" may also refer to American Jewish cuisine in general.[16]

During the annual eight-day Passover holiday, Jews who are more traditionally observant do not eat chametz (leavened bread). During Passover some American Jews eat matzo and other foods that conform to this restriction.[17][18]

American Jews, like Jews elsewhere in the world, often participate in a Passover seder at the beginning of Passover. This is a ritual meal that includes the telling of the story of Passover – the Exodus of the Jews from Egypt. At a seder, the Passover Seder plate is a plate with special food items that are symbolic of different aspects of Passover.[19]

Around 90% of American Jews are Ashkenazi Jews, whose ancestors came from Eastern or Central Europe, where many of them spoke Yiddish as their first language. The foods commonly associated with American Jewish cuisine therefore have their origins in those regions.

The United States also has a sizeable population of Sephardic Jews, whose ancestors lived in Spain or Portugal, and later in other Mediterranean areas, and Mizrahi Jews, whose ancestors lived in the Middle East or North Africa.[6][20] Sephardic and Mizrahi Jews have their own distinct cuisines, which, like Ashkenazi cuisine, were heavily influenced by their places of origin.[21][22] Although always outnumbered by their Ashkenazi counterparts, there are significant Sephardic and Mizrahi communities across America. These include the Persian Jews of Los Angeles,[23][24] the Moroccan Jews of Manhattan,[25][26] the Turkish Jews of Seattle,[27] and the Syrian Jews of Brooklyn.[28] Additionally, Mizrahi and Sephardic cuisine predominates in the modern state of Israel.

Therefore, Middle Eastern and Mediterranean dishes such as falafel, hummus, couscous, and shakshouka are also part of American Jewish cuisine.[29][30]

The two largest groups of Eastern European (Ashkenazi) Jews were Litvaks, who lived farther to the north and east, in the area of Lithuania, and Galitzianers, who lived farther to the south and west, in the area of Galicia. Each group spoke their own dialect of Yiddish. According to some writers, it is sometimes possible to guess the ancestry of an American Jew by knowing their preferred style of gefilte fish.[31] Litvaks ate gefilte fish that was flavored with salt and pepper, while Galitzianers preferred theirs to be sweeter.[32] The border between the areas where Litvaks and Galitzianers lived has therefore been referred to as "the gefilte fish line".[32][31] 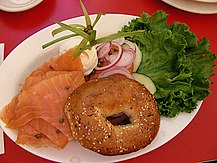 A bagel, lox, and cream cheese sandwich, before assembly 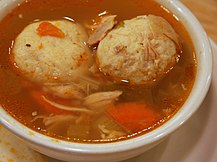 Gefilte fish is made with fish that has been minced and then poached. 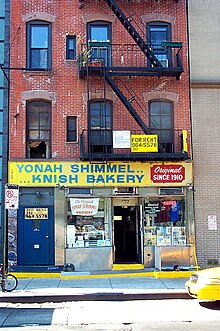 Yonah Shimmel's Knish Bakery on the Lower East Side

Dining at Chinese restaurants on Christmas

The American Jewish custom of eating at Chinese restaurants on Christmas Day or Christmas Eve is a common stereotype portrayed in film and television, but it has a factual basis. The tradition may have arisen from the lack of other open restaurants on Christmas, as well as the close proximity to each other of Jewish and Chinese immigrants in New York City.[57][58][59][60]