The African Economic Community (AEC) is an organization of African Union states establishing grounds for mutual economic development among the majority of African states. The stated goals of the organization include the creation of free trade areas, customs unions, a single market, a central bank, and a common currency (see African Monetary Union) thus establishing an economic and monetary union.

Currently there are multiple regional blocs in Africa, also known as Regional Economic Communities (RECs), many of which have overlapping memberships. The RECs consist primarily of trade blocs and, in some cases, some political and military cooperation. Most of these RECs form the "pillars" of AEC, many of which also have an overlap in some of their member states. Due to this high proportion of overlap it is likely that some states with several memberships will eventually drop out of one or more RECs. Several of these pillars also contain subgroups with tighter customs and/or monetary unions of their own:

These pillars and their corresponding subgroups are as follows:

1 The Arab Maghreb Union does not participate in the AEC so far, because of opposition by Morocco 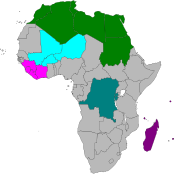 Their membership is as follows:

1 Only African GAFTA members are listed.
GAFTA and MRU are the only blocs not currently stalled.

The AEC founded through the Abuja Treaty, signed in 1991 and entered into force in 1994 is envisioned to be created in six stages:

1 not all members participating yet
2 telecommunications, transport and energy - proposed
3 sensitive goods to be covered from 2012

The African Free Trade Zone (AFTZ) was announced on Wednesday October 22, 2008 by the heads of Southern African Development Community (SADC), the Common Market for Eastern and Southern Africa (COMESA) and the East African Community (EAC).

In May 2012 the idea was extended to also include ECOWAS, ECCAS and AMU.[9]