Cooking styles and dishes from the nation of Georgia

Georgian cuisine (Georgian: ქართული სამზარეულო, translit.: kartuli samzareulo) is the traditional cuisine of Georgia. Georgian cuisine has similarities with Persian and Caucasus cuisine. Every region of Georgia has its own distinct style of food preparation. Eating and drinking are important parts of Georgian culture.

Georgia was one of the countries on the Silk Road, which resulted in travelers influencing Georgian cuisine. The Georgian love of family and friends is one of the reasons why the feast supra (tablecloth) is so important in Georgia. Supra is offered spontaneously to relatives, friends or guests. Every supra has its tamada (toastmaster), who gives the toast and entertains the guests.

Abkhazian cuisine uses a lot of spices and walnuts.

Adjarian cuisine is considered a very diversified cuisine, which was influenced by its nature (seaside, mountainous part) and by history.

The cuisine of Guria is based mostly on poultry (especially chicken meat), corn-bread (Mchadi) and on walnuts, like the cuisine of Imereti.

The cuisine of Imereti shares a lot of affinities with the neighbouring region of Guria and is known to use a lot of walnuts.

Kakhetian cuisine is considered to be a more meat-based cuisine and the region itself is called the "Region of Wine".[by whom?] It is also known as the birth-place of one type of Georgian bread, Tonis Puri.

Kartli is known as a very rich region in terms of fruits (especially apples, apricots, figs, and peaches) and vegetables (especially cucumbers, tomatoes, and onions).

The regional cuisine of Mingrelia can be considered as the most famous in Georgia. It uses a lot of spices and walnuts.

These cuisines are often considered as one due to their similarities.

The cuisines of Racha and of Lechkhumi share most of their dishes and are often grouped into one cuisine as a consequence.

The Cuisine of Samtskhe-Javakheti consists of two regional cuisines: Meskhetian and Javakhetian. Due to their similarities, they are often considered as one regional cuisine. This cuisine differs significantly from other regional cuisine of Georgia, partly because of its heavy use of goose meat and historical Turkish rule of the region.

Georgian breads are traditionally baked in a large, round, well-shaped oven called a tone.

Khachapuri, also spelled as Hachapuri, is a traditional Georgian dish of cheese-filled bread. The bread is leavened and allowed to rise and is shaped in various ways, usually with cheese in the middle and a crust which is ripped off and used to dip in the cheese. The filling contains cheese (fresh or aged, most commonly sulguni), eggs and other ingredients.[1]

There are several distinctive types of khachapuri in Georgian food from different regions of Georgia:

Though Georgian cuisine is not very fish-oriented, there are still some dishes mainly made of trout, catfish and carp:

A plate of Khinkali

with bread and salad

The most popular Georgian meat dishes include:

Sauces and spices common in Georgian cuisine include: 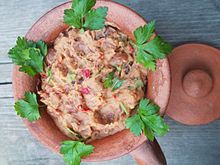 Georgia is one of the oldest wine-producing regions in the world. The fertile valleys and protective slopes of the Transcaucasia were home to grapevine cultivation and neolithic wine production (Georgian: ღვინო, ɣvino) for at least 8000 years.[3][4][5][6] Due to the many millennia of wine in Georgian history and its prominent economic role, the traditions of wine are considered entwined with and inseparable from the national identity.[3]

Among the best-known Georgian wine regions are Kakheti (further divided into the micro-regions of Telavi and Kvareli), Kartli, Imereti, Racha-Lechkhumi and Kvemo Svaneti, Adjara and Abkhazia.

Alcoholic drinks from Georgia include chacha and wine (especially Georgian wine). Some of the most well-known Georgian wines include Pirosmani, Alazani, Akhasheni, Saperavi, and Kindzmarauli. Wine culture in Georgia dates back thousands of years, and many Georgian wines are made from traditional Georgian grape varieties that are little known in the West, such as Saperavi and Rkatsiteli. Georgian wine is well known throughout Eastern Europe, and is a significant national export, with exports of over 10 million bottles of wine per year. Georgia is also home to many beer brands, including Natakhtari, Kazbegi, Argo, Kasri, and Karva.

Lagidze water is a Georgian flavored soda drink, made with a variety of natural syrups, sold bottled or mixed directly in a glass from a soda fountain. Common types of mineral water from Georgia include Borjomi, Nabeghlavi, Likani, and Sairme.