The ATA Carnet, often referred to as the "Passport for goods", is an international customs document that permits the tax-free and duty-free temporary export and import of nonperishable goods for up to one year. It consists of unified customs declaration forms which are prepared ready to use at every border crossing point. It is a globally accepted guarantee for customs duties and taxes which can replace the security deposit required by each customs authority. It can be used in multiple countries in multiple trips up to its one-year validity. The acronym ATA is a combination of French and English terms "Admission Temporaire/Temporary Admission." The ATA carnet is now the document most widely used by the business community for international operations involving temporary admission of goods.

The ATA Carnet is jointly administered by the World Customs Organization (WCO) and the International Chamber of Commerce (ICC) through its World Chambers Federation.[1][2]

Early suggestions for an international temporary admission scheme were made during the 1900 and 1913 Congresses on Customs regulations, which were examined by Customs experts convened in 1923 under the auspices of the League of Nations but no positive result was achieved. In 1952, based on the recommendations already put forward in the ICCs' report on "Invisible Barriers to Trade and Travel" from 1949,[3] the contracting parties to GATT adopted an International Convention to Facilitate the Importation of Commercial Samples and Advertising Material proposed and drafted by the International Chamber of Commerce and which entered into force on 20 November 1955.[4][5][6][7][8] During the meetings of the Seventh Session Working Party, which prepared the text of the convention, and following a proposal by the French delegation, some consideration was given to the possibility of introducing a system of triptyques or carnets for samples of value carried by commercial travellers. It was suggested that such a system would alleviate the financial burdens and administrative formalities imposed upon firms sending representatives abroad.[9] The Working Party was informed that a scheme for duty-free admission of commercial travellers' samples under cover of a customs triptyque had been worked out for operation on a bilateral basis between Austria and Switzerland though it had not yet been put into force. On 1 March 1954, the Austrian Government informed the Executive Secretary of GATT that on 1 February 1954 the scheme for the duty-free admission of commercial travellers' samples was put into effect by the Customs Administrations of Austria and Switzerland. In accordance with this agreement commercial travellers and agents were permitted to import commercial samples from Switzerland into Austria, and conversely, temporarily duty-free under cover of a commercial sample triptyque without the deposit of import duties. The guarantees for the import duties are given by an Austrian insurance company for imports into Austria, and by a Swiss company for the imports into Switzerland. The application of this system was limited to collections of samples on which the customs duties would not exceed 60,000 Austrian schillings or 10,000 Swiss Francs. The period allowed for re-exportation was one year.[10][11]

Thus, based on this convention, this triptyque scheme and allegedly following Charles Aubert's vision and initiative (director of the Chamber of Commerce, Industry and Services of Geneva and future first director of the Chambres de Commerce Suisses),[12][citation needed] the Customs Co-operation Council with the cooperation of the International League of Commercial Travellers and Agents and of the ICC's International Information Bureau of Chambers of Commerce prepared the Customs Convention Regarding the E.C.S. Carnets for Commercial Samples which entered into force on 3 October 1957.[13] The new Convention introduced the E.C.S. Carnet, a substitution on an optional basis for the usual national temporary importation papers which replaced any deposit or guarantee for suspended import duties and charges if such a guarantee was required by the customs authorities in a particular case. The initials E.C.S. stand for the combined English and French words: Echantillons Commerciaux - Commercial Samples. The first countries to sign this convention were West Germany, Austria, Belgium, Denmark, France, United Kingdom, Republic of Ireland, Italy, Luxembourg, Norway, Netherlands, Portugal, Sweden, Switzerland and Turkey and the Belgian Ministry of Foreign Affairs acted as the depositary of the convention.[14] The Customs Co-operation Council informed the Executive Secretary of GATT that the "satisfactory results obtained by the use of E.C.S. carnets for the temporary importation of commercial samples (in 1960, 15,600 ECS carnets were issued, for a total value of US$16,320,000) has induced the international trading community to propose that the facilities offered by the ECS Carnet Convention should be extended over the widest possible field."[15] This idea was supported by the International Chamber of Commerce.[16]

A preliminary enquiry on the usefulness of a customs document for temporary duty-free admission, carried out by the Customs Cooperation Council with the assistance of GATT, UNESCO and ICC showed general support for the preparation of a document on the lines of the ECS carnet, which could be used to facilitate, in particular, the temporary admission of professional equipment and of goods for display or use at exhibitions, fairs, etc. Since two Conventions concerning the temporary admission of these items were in the course of preparation, it was recognised that it would be highly desirable that the Convention creating the new document should be ready for adoption by the council, at the same time as these Conventions; or as soon as possible thereafter.[16] Hence, due to the ECS Carnet success, in 1961 the Customs Cooperation Council adopted the Customs Convention on the ATA Carnet for the Temporary Admission of Goods (ATA Convention) which then entered into force on 30 July 1963.[1][17][18] ATA Carnets are seen as upgraded version of ECS Carnets, which are no longer limited to commercial samples.[12] More specific conventions for each type of applicable good were subsequently worked out and agreed on by the CCC. At its 47th / 48th Sessions (June 1976), the Council recommended Contracting Parties to the Customs Convention Regarding the E.C.S. Carnets for Commercial Samples to denounce it as it duplicates the ATA Convention. To date, 21 countries have deposited their instruments of denunciation of the ECS Convention which, as a result, now has only one Contracting Party (Haiti).[19]

"The States signatory to this Convention, convinced that the adoption of common procedures for the temporary duty-free importation of goods would afford considerable advantages to international commercial and cultural activities and would secure a higher degree of harmony and uniformity in the customs system of the Contracting Parties." – (Preamble of the A.T.A. Convention)[2]

Hence, in order to simplify and harmonize temporary admission formalities provided in various Conventions, the Convention on Temporary Admission, i.e. Istanbul Convention, was adopted at WCO on 26 June 1990 and then entered into force on 27 November 1993.[3][1][20] Its objectives and principles are:

In recent years the International Chamber of Commerce has been studying the possibility to digitize the ATA Carnet.[21][22] A pilot project to test the digital ATA Carnet is currently undergoing.[23] The first ever transaction on a digital carnet was processed on 20 October 2019 at Zurich Airport, Switzerland.[24]

In every country in the ATA Chain, a guaranteeing association (NGA)– approved by its respective Customs and the ICC World Chambers Federation – administers the operation of the ATA Carnet System. The role of a national guaranteeing associations is to guarantee to its Customs administration the payment of duties and taxes due when ATA Carnets have been misused on its territory (non-or late re-exportation of goods, for instance). The national guaranteeing organisation can also, with the prior consent of its Customs administration, authorise local chambers to deliver ATA Carnets on its behalf. In major trading nations, dozens of local chambers have that authority. Within ICC World Chambers Federation, a World ATA Carnet Council (WATAC) gathers the national guaranteeing organisations from all countries where the ATA Carnet is in force today.[2] In short: 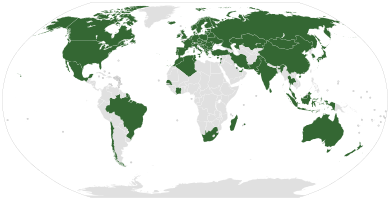 In the early 1960s, the ATA system was in use in Ivory Coast, France, Yugoslavia, Switzerland and Czechoslovakia. In 1982 there were 36 countries.

Today, the ATA Carnet System is in force in 78 countries and territories.[25]

The following is a list of countries and their relative National Guaranteeing Associations. These countries officially issue ATA Carnets.

Field of application per country

The table below is a list of countries which have signed the ATA Convention and/or the Istanbul Convention. The type of goods accepted depends on the eventual Conventions and Annexes they have signed. Some countries have signed either the ATA Convention or the Istanbul Convention but have yet to appoint a National Guaranteeing Association to start officially issuing ATA Carnets. Also in some cases, despite not having signed a given Convention or Annex, the according type of goods will be accepted by some countries under their national law. China, for example, while not having signed Annex B6 regarding sporting equipment, will nonetheless accept temporary importation for these goods under its national laws.[26]

Due to bilateral, multilateral or subnational customs agreements, the following cases are possible:

The ATA Carnet allows the business traveller to use a single document for clearing certain categories of goods through customs in several countries without the deposit of import duties and taxes. The Carnet eliminates the need to purchase temporary import bonds. So long as the goods are re-exported within the allotted time frame, no duties or taxes are due. The main benefits can be summarised in:

Failure to re-export all or some of the goods listed on the Carnet results in the payment of applicable duties and taxes. Failure to remit those duties results in a claim from the foreign customs service to the importer's home country.[37]

The ATA Carnet comprises a front and back cover within which are counterfoils and vouchers for each country to be visited or transited. The vouchers act as receipts for entry and re-export in foreign countries and are kept by foreign customs officials. The counterfoils are stamped by the foreign customs services and act as the carnet holders receipt.[2] ATA Carnets are in A4 paper format.

A duplicate Carnet is issued to replace an existing Carnet in the case of the destruction, loss or theft. The validity of which expires on the same date as that of the one being replaced. Some countries also accept replacement carnets: a replacement Carnet is issued where it is expected that the temporary admission operation will exceed the period of validity of the one being replaced. A new validity date will be given to the replacement Carnet. When accepting the replacement, the Customs authorities concerned discharge the Carnet replaced.

Goods covered by the ATA Carnet

Most common uses include but not limited to:

ATA Carnets may not be used for all purpose determined by the Istanbul (ATA and others) conventions in every member state of the ATA Carnet system, as they might not have acceded to the respective convention.[39] 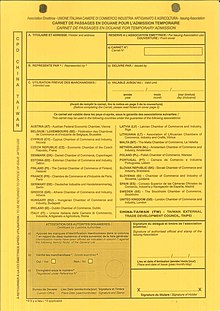 A front cover page of a CPD China-Taiwan Carnet

A system similar to the ATA Carnet System called Carnet de Passages en Douane China-Taiwan (CPD China-Taiwan) operates on the basis of bilateral agreements between Taiwan (under the name of Chinese Taipei) and a certain number of ATA countries including the EU member states, Australia, Canada, India, Israel, Japan, Korea, Malaysia, New Zealand, Norway, Singapore, South Africa, Switzerland and the United States of America. Other than a different colour code to distinguish it from the ATA Carnet, the conditions for its use, the goods for which it can be used, and customs procedures are identical.[40][41] The CPD China-Taiwan Carnet is not to be confused with the also named CPD Carnet used to temporarily import motor vehicles into foreign countries.