The κ-opioid receptor (KOR) is a G protein-coupled receptor that in humans is encoded by the OPRK1 gene. The KOR is coupled to the G protein Gi/G0 and is one of four related receptors that bind opioid-like compounds in the brain and are responsible for mediating the effects of these compounds. These effects include altering nociception, consciousness, motor control, and mood. Dysregulation of this receptor system has been implicated in alcohol and drug addiction.[5][6]

The KOR is a type of opioid receptor that binds the opioid peptide dynorphin as the primary endogenous ligand (substrate naturally occurring in the body).[7] In addition to dynorphin, a variety of natural alkaloids, terpenes and other synthetic ligands bind to the receptor. The KOR may provide a natural addiction control mechanism, and therefore, drugs that target this receptor may have therapeutic potential in the treatment of addiction.

There is evidence that distribution and/or function of this receptor may differ between sexes.[8][9][10]

Based on receptor binding studies, three variants of the KOR designated κ1, κ2, and κ3 have been characterized.[13][14] However, only one cDNA clone has been identified,[15] hence these receptor subtypes likely arise from interaction of one KOR protein with other membrane associated proteins.[16]

Similarly to μ-opioid receptor (MOR) agonists, KOR agonists are potently analgesic, and have been employed clinically in the treatment of pain. However, KOR agonists also produce side effects such as dysphoria, hallucinations, and dissociation, which has limited their clinical usefulness.[17] Examples of KOR agonists that have been used medically as analgesics include butorphanol, nalbuphine, levorphanol, levallorphan, pentazocine, phenazocine, and eptazocine. Difelikefalin (CR845, FE-202845) and CR665 (FE-200665, JNJ-38488502) are peripherally restricted KOR agonists lacking the CNS side effects of centrally active KOR agonists and are currently under clinical investigation as analgesics.

Centrally active KOR agonists have hallucinogenic or dissociative effects, as exemplified by salvinorin A (the active constituent in Salvia divinorum). These effects are generally undesirable in medicinal drugs. It is thought that the hallucinogenic and dysphoric effects of opioids such as butorphanol, nalbuphine, and pentazocine serve to limit their abuse potential. In the case of salvinorin A, a structurally novel neoclerodane diterpene KOR agonist, these hallucinogenic effects are sought after, even though the experience is often considered dysphoric by the user. While salvinorin A is considered a hallucinogen, its effects are qualitatively different than those produced by the classical psychedelic hallucinogens such as lysergic acid diethylamide (LSD), psilocybin, or mescaline.[18]

The claustrum is the region of the brain in which the KOR is most densely expressed.[19][20][21] It has been proposed that this area, based on its structure and connectivity, has "a role in coordinating a set of diverse brain functions", and the claustrum has been elucidated as playing a crucial role in consciousness.[20][21] As examples, lesions of the claustrum in humans are associated with disruption of consciousness and cognition, and electrical stimulation of the area between the insula and the claustrum has been found to produce an immediate loss of consciousness in humans along with recovery of consciousness upon cessation of the stimulation.[21][22] On the basis of the preceding knowledge, it has been proposed that inhibition of the claustrum (as well as, "additionally, the deep layers of the cortex, mainly in prefrontal areas") by activation of KORs in these areas is primarily responsible for the profound consciousness-altering/dissociative hallucinogen effects of salvinorin A and other KOR agonists.[20][21] In addition, it has been stated that "the subjective effects of S. divinorum indicate that salvia disrupts certain facets of consciousness much more than the largely serotonergic hallucinogen [LSD]", and it has been postulated that inhibition of a brain area that is apparently as fundamentally involved in consciousness and higher cognitive function as the claustrum may explain this.[20] However, these conclusions are merely tentative, as "[KORs] are not exclusive to the claustrum; there is also a fairly high density of receptors located in the prefrontal cortex, hippocampus, nucleus accumbens and putamen", and "disruptions to other brain regions could also explain the consciousness-altering effects [of salvinorin A]".[21]

In supplementation of the above, according to Addy et al.:[19]

Theories suggest the claustrum may act to bind and integrate multisensory information, or else to encode sensory stimuli as salient or nonsalient (Mathur, 2014). One theory suggests the claustrum harmonizes and coordinates activity in various parts of the cortex, leading to the seamless integrated nature of subjective conscious experience (Crick and Koch, 2005; Stiefel et al., 2014). Disrupting claustral activity may lead to conscious experiences of disintegrated or unusually bound sensory information, perhaps including synesthesia. Such theories are in part corroborated by the fact that [salvia divinorum], which functions almost exclusively on the KOR system, can cause consciousness to be decoupled from external sensory input, leading to experiencing other environments and locations, perceiving other “beings” besides those actually in the room, and forgetting oneself and one’s body in the experience.[19]

The involvement of the KOR in stress, as well as in consequences of chronic stress such as depression, anxiety, anhedonia, and increased drug-seeking behavior, has been made clear.[17] KOR agonists are notably dysphoric and aversive at sufficient doses.[23] The KOR antagonists buprenorphine, as ALKS-5461 (a combination formulation with samidorphan), and CERC-501 (LY-2456302) are currently in clinical development for the treatment of major depressive disorder and substance use disorders.[24] JDTic and PF-4455242 were also under investigation but development was halted in both cases due to toxicity concerns.[24]

The depressive-like behaviors following prolonged morphine abstinence appear to be mediated by upregulation of the KOR/dynorphin system in the nucleus accumbens, as the local application of a KOR antagonist prevented the behaviors.[25] As such, KOR antagonists might be useful for the treatment of depressive symptoms associated with opioid withdrawal.[25]

In a small clinical study, pentazocine, a KOR agonist, was found to rapidly and substantially reduce symptoms of mania in patients with bipolar disorder.[8] It was postulated that the efficacy observed was due to KOR activation-mediated amelioration of excessive dopaminergic signaling in the reward pathways.[8][failed verification]

A variety of other effects of KOR activation are known:

KOR activation by agonists is coupled to the G protein Gi/G0, which subsequently increases phosphodiesterase activity. Phosphodiesterases break down cAMP, producing an inhibitory effect in neurons.[31][32][33] KORs also couple to inward-rectifier potassium[34] and to N-type calcium ion channels.[35] Recent studies have also demonstrated that agonist-induced stimulation of the KOR, like other G-protein coupled receptors, can result in the activation of mitogen-activated protein kinases (MAPK). These include extracellular signal-regulated kinase, p38 mitogen-activated protein kinases, and c-Jun N-terminal kinases.[36][37][38][39][40][41] 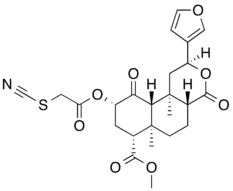 The synthetic alkaloid ketazocine[42] and terpenoid natural product salvinorin A[18] are potent and selective KOR agonists. The KOR also mediates the dysphoria and hallucinations seen with opioids such as pentazocine.[43]

Nalfurafine (Remitch), which was introduced in 2009, is the first selective KOR agonist to enter clinical use.[50][51]

Found in numerous species of mint, (including peppermint, spearmint, and watermint), the naturally-occurring compound menthol is a weak KOR agonist[55] owing to its antinociceptive, or pain blocking, effects in rats. In addition, mints can desensitize a region through the activation of TRPM8 receptors (the 'cold'/menthol receptor).[56]

The key compound in Salvia divinorum, salvinorin A, is known as a powerful, short-acting KOR agonist.[18][57][58]

Used for the treatment of addiction in limited countries, ibogaine has become an icon of addiction management among certain underground circles. Despite its lack of addictive properties, ibogaine is listed as a Schedule I compound in the US because it is a psychoactive substance, hence it is considered illegal to possess under any circumstances. Ibogaine is also a KOR agonist[59] and this property may contribute to the drug's anti-addictive efficacy.

Role in treatment of drug addiction

KOR agonists have recently been investigated for their therapeutic potential in the treatment of addiction[60] and evidence points towards dynorphin, the endogenous KOR agonist, to be the body's natural addiction control mechanism.[61] Childhood stress/abuse is a well known predictor of drug abuse and is reflected in alterations of the MOR and KOR systems.[62] In experimental "addiction" models the KOR has also been shown to influence stress-induced relapse to drug seeking behavior. For the drug-dependent individual, risk of relapse is a major obstacle to becoming drug-free. Recent reports demonstrated that KORs are required for stress-induced reinstatement of cocaine seeking.[63][64]

One area of the brain most strongly associated with addiction is the nucleus accumbens (NAcc) and striatum while other structures that project to and from the NAcc also play a critical role. Though many other changes occur, addiction is often characterized by the reduction of dopamine D2 receptors in the NAcc.[65] In addition to low NAcc D2 binding,[66][67] cocaine is also known to produce a variety of changes to the primate brain such as increases prodynorphin mRNA in caudate putamen (striatum) and decreases of the same in the hypothalamus while the administration of a KOR agonist produced an opposite effect causing an increase in D2 receptors in the NAcc.[68]

Additionally, while cocaine overdose victims showed a large increase in KORs (doubled) in the NAcc,[69] KOR agonist administration is shown to be effective in decreasing cocaine seeking and self-administration.[70] Furthermore, while cocaine abuse is associated with lowered prolactin response,[71] KOR activation causes a release in prolactin,[72] a hormone known for its important role in learning, neuronal plasticity and myelination.[73]

It has also been reported that the KOR system is critical for stress-induced drug-seeking. In animal models, stress has been demonstrated to potentiate cocaine reward behavior in a kappa opioid-dependent manner.[74][75] These effects are likely caused by stress-induced drug craving that requires activation of the KOR system. Although seemingly paradoxical, it is well known that drug taking results in a change from homeostasis to allostasis. It has been suggested that withdrawal-induced dysphoria or stress-induced dysphoria may act as a driving force by which the individual seeks alleviation via drug taking.[76] The rewarding properties of drug are altered, and it is clear KOR activation following stress modulates the valence of drug to increase its rewarding properties and cause potentiation of reward behavior, or reinstatement to drug seeking. The stress-induced activation of KORs is likely due to multiple signaling mechanisms. The effects of KOR agonism on dopamine systems are well documented, and recent work also implicates the mitogen-activated protein kinase cascade and pCREB in KOR-dependent behaviors.[39][77]

Though cocaine abuse is a frequently used model of addiction, KOR agonists have very marked effects on all types of addiction including alcohol, cocaine and opiate abuse.[23] Not only are genetic differences in dynorphin receptor expression a marker for alcohol dependence but a single dose of a KOR antagonist markedly increased alcohol consumption in lab animals.[78] There are numerous studies that reflect a reduction in self-administration of alcohol,[79] and heroin dependence has also been shown to be effectively treated with KOR agonism by reducing the immediate rewarding effects[80] and by causing the curative effect of up-regulation (increased production) of MORs[81] that have been down-regulated during opioid abuse.

The anti-rewarding properties of KOR agonists are mediated through both long-term and short-term effects. The immediate effect of KOR agonism leads to reduction of dopamine release in the NAcc during self-administration of cocaine[82] and over the long term up-regulates receptors that have been down-regulated during substance abuse such as the MOR and the D2 receptor. These receptors modulate the release of other neurochemicals such as serotonin in the case of MOR agonists and acetylcholine in the case of D2. These changes can account for the physical and psychological remission of the pathology of addiction. The longer effects of KOR agonism (30 minutes or greater) have been linked to KOR-dependent stress-induced potentiation and reinstatement of drug seeking. It is hypothesized that these behaviors are mediated by KOR-dependent modulation of dopamine, serotonin, or norepinephrine and/or via activation of downstream signal transduction pathways.